I often think that The Marvel Age of Comics served as a bridge, perhaps a Rainbow Bridge, to the graphic novel by providing longer and more complex stories with deeper characterizations.

You see, in the beginning Jack Kirby created the heavens and the Earth and arguably, Marvel’s first graphic novel in Tales of Asgard. He illustrated the earliest era of Asgard showing us how their warrior culture developed. Kirby showed the birth of Odin, his rise to power and the creation of life on Earth. We discovered the enemies of Asgard: the Storm Giants and Surtur the Fire Demon. We see the boyhood of Thor, his growth and maturation. When he was first introduced in 1962, Thor worked the same ground as heroes before him. Lame physician Don Blake finds a stick that, when struck against the ground, turns him into Thor, an actual god, immortal and capable of vast powers. At first, Thor had familiar gimmicks and weaknesses and fought aliens, communists and crooks. His stories were earthbound and not presented on any grand scale.


In late 1963, that would begin to change. The transformation started in Journey into Mystery #97 when Jack Kirby returned to the title after an absence of eight issues and gave Thor a back story with a five-page feature entitled “Tales of Asgard.” I believe that this turns out to be Marvel’s precursor to the graphic novel. It starts like self-contained chapters in a book but swiftly converted into a continued story. Stan Lee had said that the Tales of Asgard strip was all Kirby. Tales of Asgard gradually introduced Thor’s friends: Voltstagg, Hogun, Fandral, Heimdall, Balder and Balder’s sister, Sif. In Journey into Mystery #102, when Thor rescues Sif from Hela, Goddess of the Underworld, we learn that even immortals can die from her touch. This makes Thor vulnerable and therefore his adventures are not without risk. No longer does it seem that Doctor Blake becomes Thor, but Thor becomes Doctor Blake.

In Tales of Asgard we see young Thor grow up, how Loki is adopted and how his evil is inborn. The themes of Tales of Asgard gradually infiltrate the lead story when Odin visits Earth and fights the Storm Giants in Journey into Mystery #104. Heimdall also appears in this story and his history is shown in that issue’s Tales of Asgard. 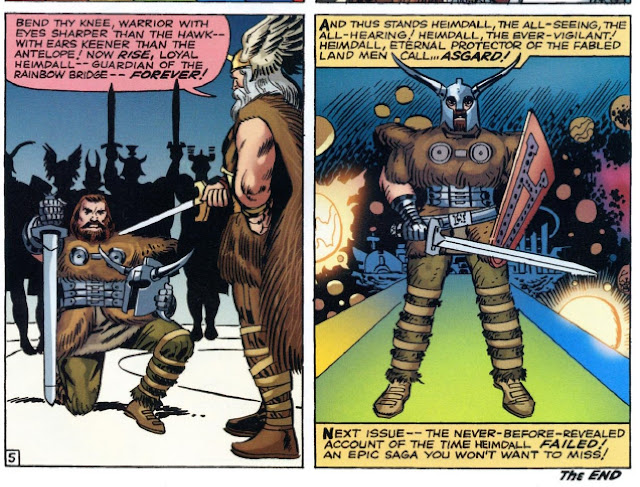 Soon, all the major characters of Tales of Asgard will appear in the feature story. While the next few issues of the main story are earthbound, in Tales of Asgard, we learn the backgrounds of Balder, the Norn Queen and the Trolls. In Journey into Mystery #119 the stage is set for epic stories, both in the main feature and separately in Tales of Asgard. Here, the Warriors Three will accompany Thor on an epic odyssey. Stan’s dialogue (Thor’s “Old English” begins with this issue) and character development is important and memorable. This issue is also the end of the first “chapter” of Tales of Asgard’s graphic novel. Its early chapters reminded me of Tolkien’s The Hobbit, which introduced and established the characters and the environment for the author’s longer and epic Lord of the Rings trilogy. That’s what is done here. So when the big adventure begins, Kirby does not have to stop and fill in the blanks.

After thirty-six episodes Kirby has developed Thor into the prototype of the modern super-hero. He has a family and a realm of his own. There is conflict between brother and brother and sometimes father and son. We shall see those elements follow through to The X-Men, Inhumans, New Gods and eventually the Eternals.

In Journey into Mystery #119 as Thor battles the Destroyer in the longer, fifteen-page lead story, Tales of Asgard begins a new chapter, one whose story lines, and new characters, will be a major plot point through many issues: The Odinsword, its relationship to and the meaning of Ragnarok and the epic death of the gods. Again, these concepts are developed and will later be layered into the main story. 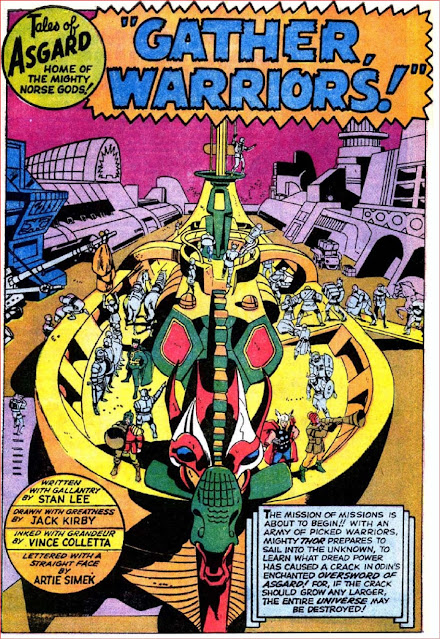 With Thor #145 (Oct 1967) after almost 50 issues and 245 pages, the voyage is over with Tales of Asgard. It was certainly graphic and, most certainly a novel as the OED would require: a “narrative or tale of considerable length in which characters and actions representative of the real life of past or present times are portrayed in a plot …” The story line ends a bit abruptly, but not completely.


A year later, in Thor #158-159, in one of the most brilliant stories of the Marvel Age, we learned that the character of Don Blake was always Thor; he was only briefly Don Blake! Marvel reprinted the original story from 1962, but with a foreword and a preface leading to a revelation that changed everything about the character. To teach his son humility and to have him grow wiser, Odin banished Thor to Earth to live as a mortal, with no memory of his true self, and made him handicapped, too. By making him a doctor, Blake is compelled to see suffering first-hand. Plot points from Tales of Asgard were completely woven into the stories of Thor #157-159 and all future issues. It was great fun and I was glad to be there for the whole experience. 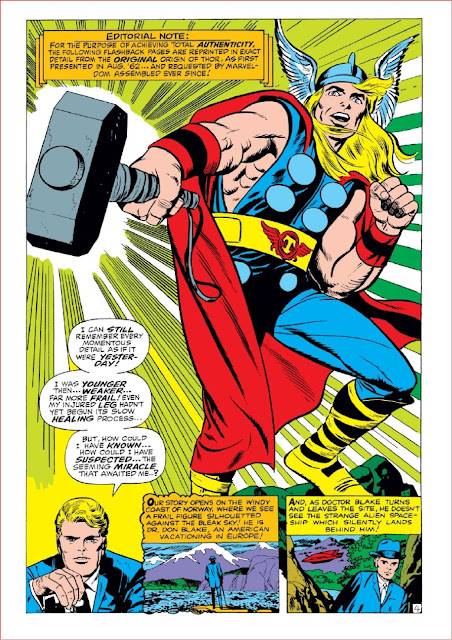 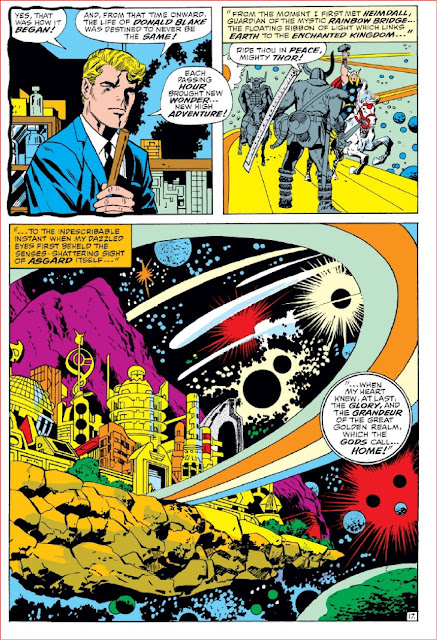 In Thor #136, Thor ends his romantic relationship with the mortal Jane Foster and begins a relationship with Sif, a goddess introduced in the Asgard series in issue #106. By this time, Kirby had established a world where Jane did not fit in. It makes even more sense now that we know that Blake did not become Thor, it was the other way around. Sif would accompany Thor on adventures in ways that Jane never could and, after visiting Asgard, never would want to. Odin became less of a prejudiced father, not wanting his son to date outside of his “kind,” but a concerned father who could foretell a bit of his son’s future. The Tales of Asgard series was a treat. It was some of Kirby’s best work and Marvel’s first graphic novel. It was treated as such when the entire series was collected in a trade paperback in 1978.

PS: Tales of Asgard did have an occasional single story. “The Golden Apples” was my favorite, a take on Little Red Riding hood. 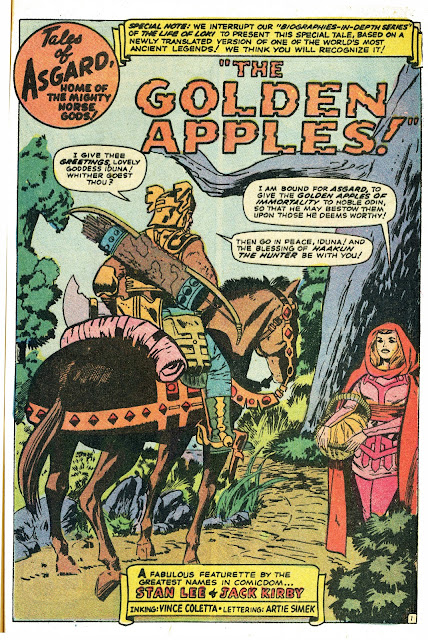 In an earlier time, many novels, were printed a chapter at a time in monthly magazines.  This was true for a great many of the Charles Dicken’s novels, so stretching a story out in monthly installments was not unique to Tales of Asgard.