Stan Lee, The Innovative Writer of His Time. And Ours. 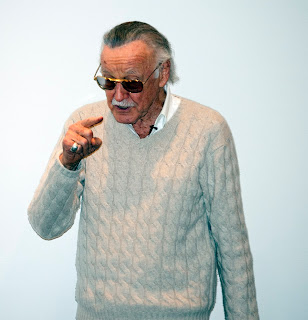 I have recently seen posts about writers and writings during the Silver Age/Marvel Age of comics.  I sometimes think that people under the age of forty do not realize how much Stan Lee changed the writing of comics, all comics.

I do not want to get into the argument of who did what at Marvel at that time, a subject that a handful of people MUST always bring up.  If you want to, please start your own blog.

Individuality: Stan Lee was the first to give characters uniqueness. If you read a Justice League comic in 1960 you could move the dialogue balloons around and it would not make much difference.  Wonder Woman sounded like the Martian Manhunter who sounded like Batman.  At Marvel, you’d never mistake Johnny Storm’s dialogue for the Thing, or The Hulk’s for Ant-Man.

Personality: His dialogue gave the characters a deeper personality more like you’d find in a novel of the 1960s, not a comic by Charlton, ACG, Dell or DC.  We learned who a person was, what motivated them, what they worried about and often who they cared for.  Did you ever read a Superman comic in the 1960s and read that he cared about Lois Lane? Or thought of his job at the Daily Planet? 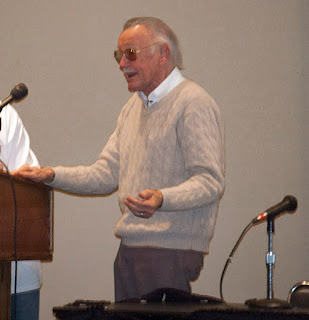 Intimacy: The personality expansion led to comments about intimacy among the characters. It is common today, but NEVER then, for the “real” first names to be used.  They called Captain America “Steve” and the Thing, “Ben” for example.  You saw that Reed and Sue were romantic, as were Pym and Van Dyne.  This was not common in other comics then. Note that in all the movies, DC and Marvel the “real” names are used. In fact, the words “Wonder Woman” are never used in her movie.

Humor: Stan really introduced a great deal of humor to the comics.  There was often a financial reason that surprises people. There may have been a great page that needed no dialogue, but to be paid for it a writer had to write something. (This changed in the 1970s). So Stan often put in something amusing. He also used funny Sound Effects or humorous footnotes.  Looking back, but not so much at the time, people find the jokes a bit to corny.

Vocabulary: In the early 1960s DC and other companies sold most of their comics to young men, 10 to 15 years of age. They used what they felt was the appropriate level of vocabulary. Words were rarely more than two syllables and there weren’t references to major literary works. Stan wanted to reach the older audience of college students and raised the reading level his dialogue. He used words such as   "insipid," "tantamount," and even "vociferous" This became more common as time went by but at the beginning it was unique to Marvel. Often in titles there were biblical references (“Vengeance is Ours!”) and also in his texts. For example: “When I was a child, I talked like a child, I thought like a child, I reasoned like a child. But when I grew up, I put away childish things.” Here is Stan from Spider-Man #50. 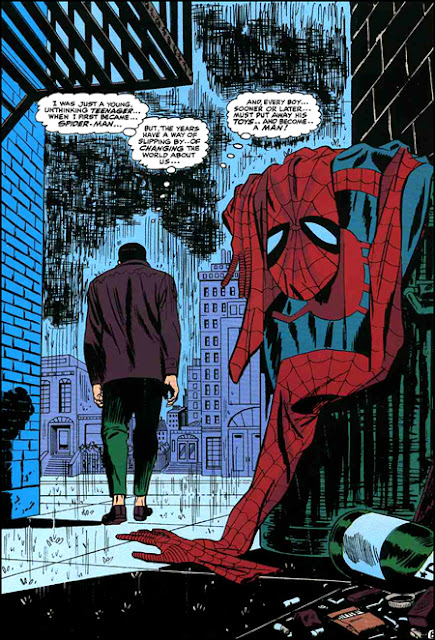 Marvel method and plotting and dialogue: At most other companies the story and dialogue was written and then the comic was drawn.  Since the writer could not see the images yet, he had to highlight the description in dialogue. For example,  when Superman is jumping out the window the panel would show someone below saying, “Look, there is Superman jumping out the window.”  Or the description would read, “One day, as Superman jumped out of a window.” Uniquely at Marvel that did not happen. Stan looked at the image and then did the dialogue. You saw Spider-Man jumping out the window, no need to repeat it. So Stan would have Spider-Man say, “I wonder if Aunt May is feeling better.”  Lee was able to advance the plot. 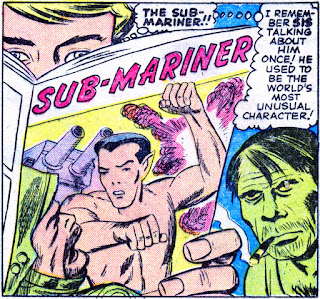 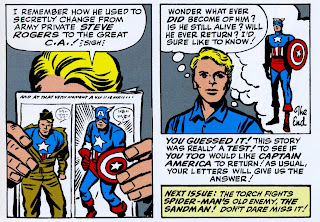 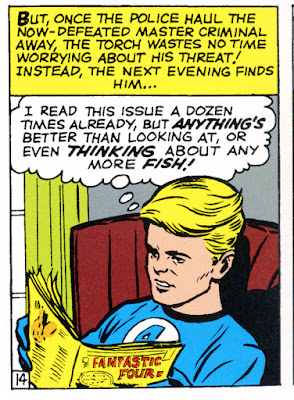 DC writers would tell you what the character was doing, at Marvel Stan told you what they were thinking. 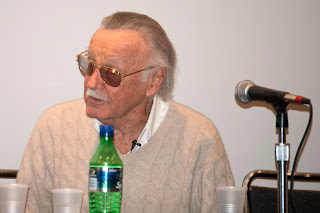 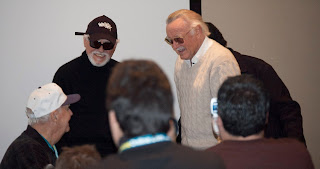 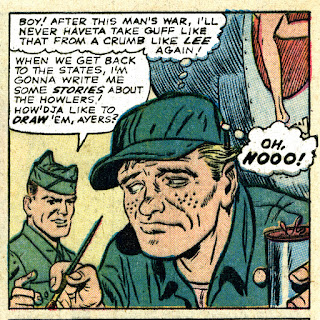 Perhaps Stan’s weakest attribute was coming up with a plot and developing it every single work day for ten years. He did rely on his artists in that regard.  And as an editor he succeeded very well and got the best out of the creative people he worked with. They often developed the plot, he advanced the story in the dialogue.  At DC, Julius Schwartz and Carmine Infantino told me that the artists often came up with the plots. Schwartz said he go to lunch and spend the entire afternoon with an artist think up a plot they would give to the writer.  Also, at DC there were often no credits. Yet, I guess, because Marvel gave credits people criticize Lee, but not Schwartz, Schiff, or Weisinger from DC.

Continuity: These concepts allowed great continuity at Marvel. You would trouble reading the comics out of order, but a DC you could pick up a comic from three years previous and it usually made no difference. (yes, there were a few important exceptions).  While Marvel did have flashbacks to fill you in, they needed less because the dialogue filled you in.

Titles: Let us not forget the wonderful titles Stan came up with that often addressed the plot: "Whosoever Holds the Cosmic Cube!," "If This Be My Destiny!," "Spider-Man No More!," "Bring Back My Goblin To Me!," "“Now, by My Hand, Shall Die a Villain!,” "This Hostage Earth!" and so many more. He also borrowed from the Bible every now and then: “Vengeance is mine, I will repay, says the Lord.” is from Romans 12: 19-21. The title of Avengers #20 is “Vengeance is Ours!” 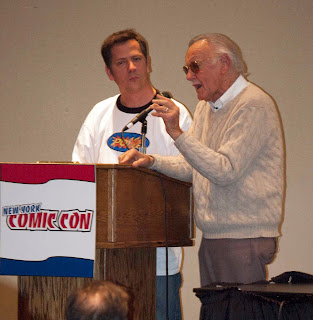 In many ways Stan Lee had a novel approach.  Novel here does not mean just unique, but in writing novels.  Characters were developed and plotlines were made more complex. The were few Graphic novels before 1961 and none from Marvel until 1977's Silver Surfer. Yet Stan’s writing during the Marvel Age may have laid the groundwork for the Graphic Novels yet to come. That is, fans now appreciated longer and complex stories which may have made graphic novels more in demand. 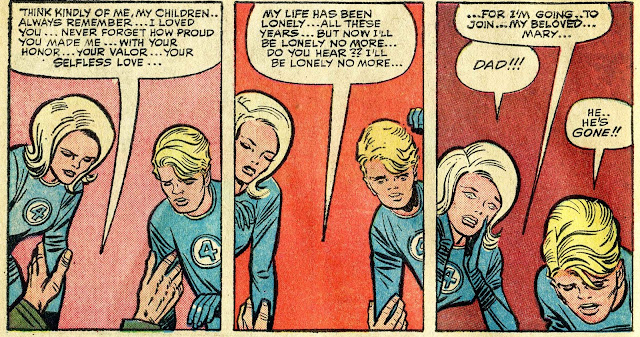 It is fifty years later and people are still enjoying those stories. Even Millie. 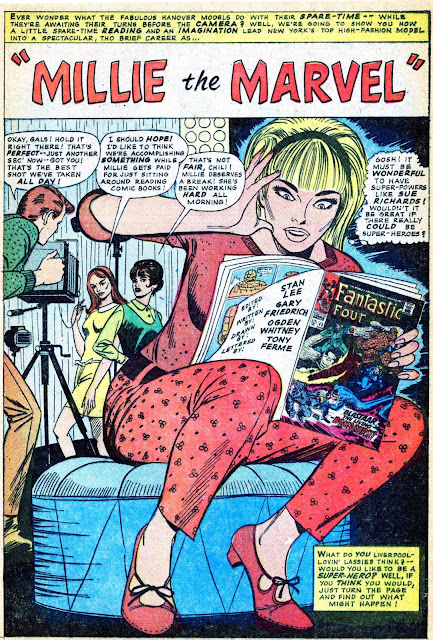