The Startling BLOG of the Silver Surfer!

In Fantastic Four #48, we are introduced to the Silver Surfer. In his very first panel, the text reads: “But life goes on--” This is ironic given that the Surfer was the harbinger of death. If he came to your planet, life did not go on! But when he was turned around by the actions of a beautiful blind woman in Fantastic Four #50, he became Marvel’s first extra-terrestrial super-hero. At DC, Superman was their first, way back in 1938. The Surfer, however, was feared and shunned, something no DC hero was in the 1960s. 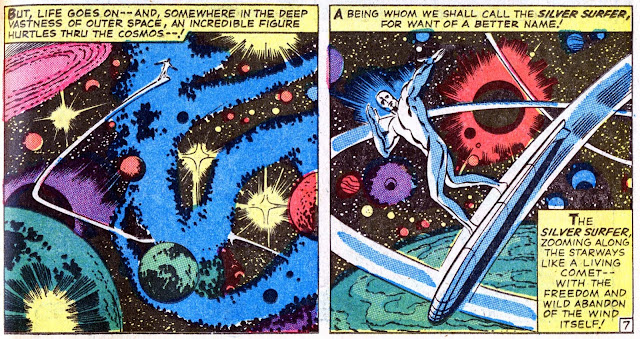 I had wondered over the years, which back story of the Silver Surfer best suited the character. It has to be Buscema’s, not Kirby’s mostly because Kirby’s Surfer had no real back story.

In Fantastic Four #48, Kirby gave him form and Stan Lee gave him substance. But no one gave him pants. For all we knew, the Surfer was life from lifelessness, he had no gender. Stan used masculine pronouns for him, but he really was an “it” He had no parts to be private with and did not need pants.

John Buscema did a beautiful job. In his first story he gave us a very different Surfer. Kirby’s Surfer went from planet to planet, looking for life and then signaled thumbs up or down to his master. Galactus would come down and would, like Mobil-Exxon, suck all the energy out of the planet. The Surfer was a murderer. If you say he wasn’t, that Galactus was, it was like saying that all those Gestapo agents who loaded people on trains going to the concentration camps were not culpable. The Kirby Surfer knew exactly what he was doing, even if he was “only following orders.”

Norrin Radd, beginning in Silver Surfer #1, was a great seeker of truth and human perfection. In fact, he was a snob. His planet was a place of peace and contentment, but he could not be content because everyone else was. He had a sense of danger, a “spidey sense” that told him that something bad was going to happen. In fact, when Galactus’ ship travels to his planet, Norrin knows that they will be linked. 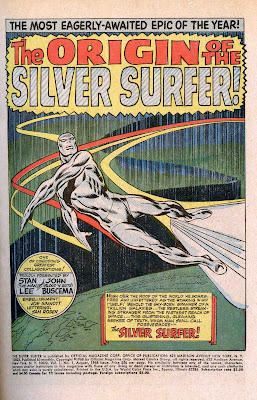 Showing nobility, Norrin gives up the life he wasn’t happy with and becomes the herald of Galactus, in order to save his planet. Buscema’s Surfer changed the story. In one panel the Surfer bypasses a planet because it was filled with primitive life. Yet, the very next panel reminds us that he came to Earth to extinguish us all! Kirby’s Surfer came to Earth with no humanity, but learned it from Alicia. He was programmed to kill, but once he gained his humanity, he realized it was wrong and began to change his ways. This works well because Kirby’s Surfer was a supporting character and did not need the depth of a starring one. Buscema’s Surfer once had humanity and then lost it. Then he worked to regain it. 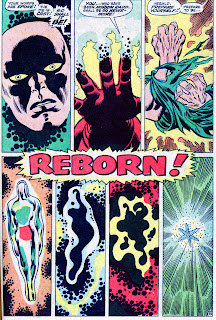 There was a major problem with Galactus. Since Galactus could take life, it would be seriously wrong if he could create life, too. This would make him God. Not a god, like Thor, but God. Why couldn’t Galactus then create life, create planets, like we create gardens and live off them? Galactus should not be able to create life; that is too special as a part time character.

As a full-time character The Surfer needed an origin, he could not be life from lifelessness. Galactus therefore was needed to have transformed Norrin Rand into the Silver Surfer, not create one from nothingness.

Galactus came to Earth with a big G on his chest. Not only did he spoke our language, his tailor did! He asks the F.F. in issue #49 and to Norrin, “Would you not hesitate to step on an ant?” How does Galactus know about ants? 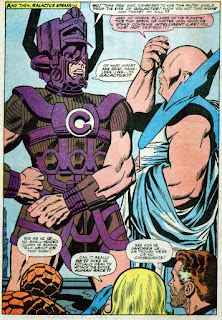 So while the Kirby Surfer was a perfect fit for a supporting character, if you wanted a hero with his own bi-monthly comic, you needed the Buscema version: a character, with nobility, with heroic motivation, vulnerability, a sense of decency… and pants.

In an interview in Changes Magazine in 1970 Lee says, When I discussed the character with John Buscema before he started drawing the book, John said: “Well, how do you want me to think of him? You know, what kind of guy?” And I said: “The closer you come to Jesus Christ the better.”

Marvel’s mistake, which probably led to cancellation, was to have one of their mightiest characters Earthbound. He was called the Sentinel of the Spaceways, but he had no Easy Pass to get to outer space, he was stuck on Earth. The stories of Thor improved when his tales were off Midgard (Earth) and placed inAsgard, the Underworld, or in different realms. 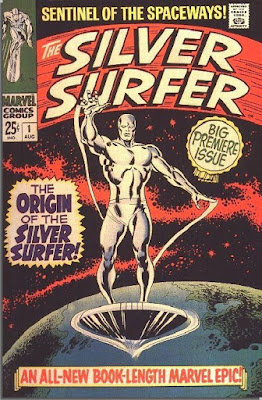 The early Surfer stories were often about prejudice. This rarely fully captured the character, or gave him a serious threat, but would have made an interesting sub-plot every once in a while. He should have been able to roam the Skyways, even go home and have great adventures off the Earth. In his best story he went to Hell (in issue #3). Space travel might have also stopped his incessant whining. There is a difference between prejudice and common sense. If I saw a naked person, painted silver, walking down the street in the winter and we were 1,000 miles from the ocean and he was carrying a surfboard, is it prejudiced to think he is nuts?