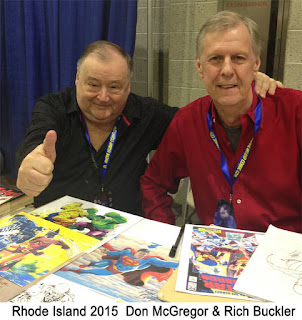 This is a quiet time for remembering and mourning, all other issues can be cast aside at this time. We have lost a member of our creative family. Many fans have grown up turning the pages of his comics.

Just over a year ago, Roy Thomas asked me to work with Mr. Buckler to provide pictures for an article Richard Arndt for Alter Ego, Roy’s magazine.  I didn’t know that Mr. Buckler was ill, but now I understand why he was so concerned about the quality of the pictures. He also used a word several times, “legacy.” I also now know why he put so much in my hands.

We actually had just one real disagreement. Roy Thomas asks me to produce scans from the actual comic, with no touch ups or “fixes.”  Roy wants to reproduce the comics exactly the way they were first originally printed. Rich, however, a perfectionist with his own work, wanted the scans to look as close to the ORIGINAL artwork as possible. ("I am a real snob when it comes to printed representations of my work.  On other people's fan websites, I see all the time scans of my work that are just horrendous.  Photos too are pretty awful.")


So we had discussions, no arguments. ("And much of the discussions were technical, here is example: "Check out the Deathlok image I have attached to this email.  It's 1.5 MB, but it is a jpeg.  However, it opens in Photoshop as 4.45M.  Save that jpeg in Photoshop as a psd and it saves to 3.60 MB.)"

There are some special things here. First, I will let Richard Buckler speak in his own words (with only a few of my comments in parenthesis).  And I will show here the pictures that he sent me, wanting them to be included in the article.  Many were not, for no other reason that after 50 were included at there was no room for more. 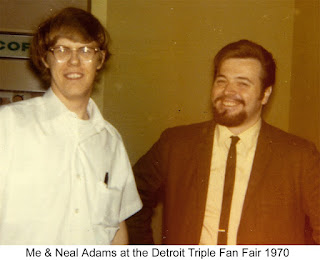 The words of Rich Buckler:

See my attached photo of Don McGregor and me.  Small file, yes, but it was originally scanned at 300 dpi--so the image is fine and can be used for print.

…I have to wonder at time why, almost never, is there a mention of Jack Kirby personally recommending me to Marvel?  Jack's words to me:  "Rich, if you are ever in New York, go see Stan Lee and tell him I said to give you a job!"  Or that when he and his wife Roz had seen my efforts to pay homage to Jack and his version of F.F.--Jack loved the work and took it as a compliment.
This business of the comics is a lot like Hollywood.  And the fans (God bless 'em!) do love the dirt that makes it into comics "journalism" from time to time.  Yeah, I do tend to get touchy about things now and then.
Like I said before, I'm just looking after my legacy.  I appreciate your efforts!  Take care--

All of the covers I have posted on Facebook are from my scans--all of them scanned at 300 dpi.  All have been cleaned up and made presentable in Photoshop.  I'm a real snob about this.  I'm always wary of scans for print that are done by a third party.  And I am very tech savvy when it comes to images for print.  I do all of my own computer work and have been doing so for almost twenty years. (That’s why he wanted to fix up the scans for Alter Ego) 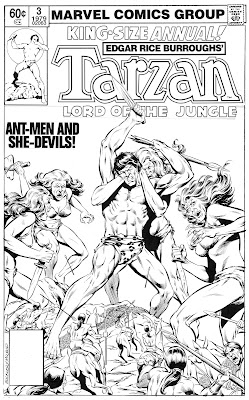 Roy will remember those figures of Superman and Captain Marvel.  For the Alter-Ego cover version, I drew Superman as the Cap figure, and Cap as the Superman figure--just for fun and to make it unique.  I gifted the original to Roy. 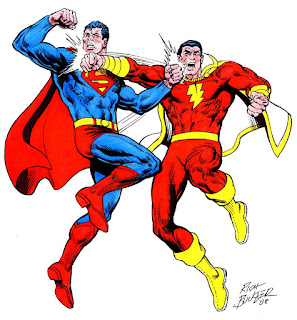 Thanks for taking the extra care for this--and for caring in the first place!  If you can grab a few moments please send me the scans that you prepared and sent to the designer.

The scan of my signature as a graphic might be useful to add a personal touch.  The drawing of Namor is an original pencil drawing I did for pleasure.  Love that character!

The Jack Kirby piece is the only comics work by Jack that I inked.  This was for Archie/Red Circle.  The Hulk piece is an original which I offer at conventions as a print 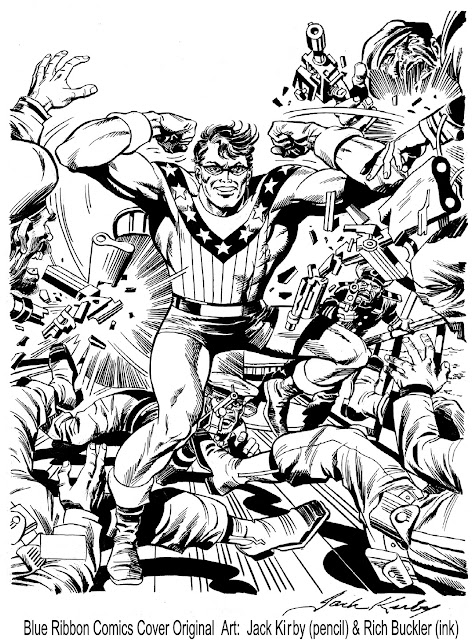 An original painting and a She-Hulk watercolor print. 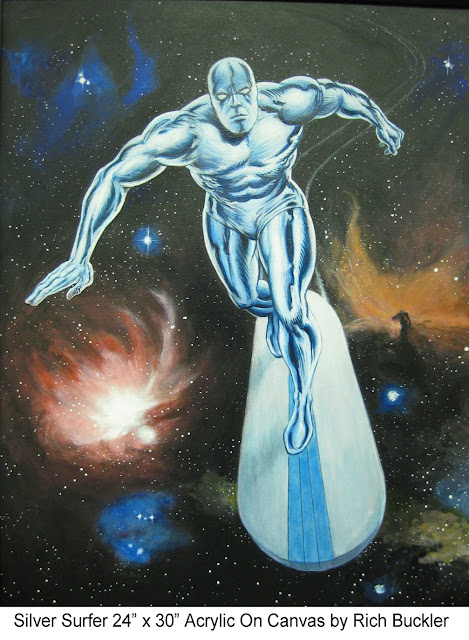 Negative comments are to be expected from time to time, I suppose.  If I got upset every time someone didn't like something I drew--well, let's just say it would be a waste of emotions.  Sometimes I comment on the comment just to provide some balance--and to offer some hopefully new information.  But it's never pleasurable to argue with anybody.

Deathlok was not a robot, and there was no Jim Steranko take-off going on here.  Yes, I was using the same type of cinematic storytelling techniques as Jim, but not imitating him.  I was one of the few comics creators at that time who understood how to use that graphic storytelling properly.

It seems that at the time no one knew the difference between a cyborg and a robot--not even the film producers of the Six Million Dollar Man (which was an adaptation of "Cyborg" the novel).  Even later that Terminator knock -off of Deathlok was not a cyborg, not really (he was an artificially intelligent robot with a human flesh covering--not the same thing by any means).

There was nothing like Deathlok before Deathlok in Astonishing Tales.  My creation was a re-animated corpse that was enhanced with metal and mechanical parts that were coordinated by an on board computer.  Nothing like anything Jim Steranko or Jack Kirby ever did.


I have found from past experience that more often than not graphic designers muck up the works and often complicate things unnecessarily.
And so the above notwithstanding, yes, you have a smile and a handshake coming to you.

Black Panther is a particular favorite of mine since my youth.  It wasn't so much bravery that attracted me to this somewhat controversial character--it was my search for truth and authenticity and relevance!  I still have that going.


With Black Panther in Jungle Action and Deathlok in Astonishing Tales I was experimenting with graphic narrative like Jim was, but I was not borrowing anything from him.  I wasn't using Jim Steranko's movie making techniques.  He didn't invent the movies!  And I didn't draw any "Jim Steranko Effects" either!  I love Steranko's work.  But realistically, Jim was not the only innovator to come along in comics at this time.  And nobody, ever, was guiding me or telling me what to draw and how to draw it.

I have read somewhere on the internet, maybe Facebook, that Rich Buckler was much better when he drew in his own style and that Marvel told him to draw like Jack Kirby--and other such related nonsense.  Where do people get these ideas?  And where do they get off passing off such gossipy tidbits as historical fact? 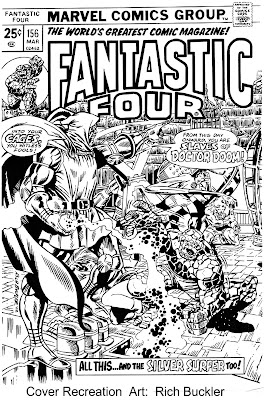 My visual references to Jack Kirby on my early run on Fantastic Four were meant as an homage.  I wasn't being sneaky or dishonest or trying to get away with anything.  I was doing a send-up of The King and trying to restore some of Kirby's dynamics to the book and the characters he created.  This was a real "fanboy" thing to do, I know.  But it has been misrepresented in print and on the internet many times.  And always, in what is written about it, the meaning is pejorative and mean-spirited.


(Finding out about his medical problems, I would email and ask how he was doing)
Well, how am I doing?  Honestly?  Not too well.  I am in the middle of a medical dilemma and I am scheduled for surgery next week.
I don't really want any details released to the public, but this is something serious.  I am hopeful of a complete (if not speedy) recovery.
Right now I am struggling financially just to keep above water. So yes, spread the word, and let those who might care know that their help is welcome and much appreciated!
Meantime, I remain positive and continue to put in work hours at the drawing board (though I am definitely not at 100% in terms of productivity).
I'm handling things as best I can.  But I have only recently finally gotten past denial that I can get through this totally on my own.
Thanks for your concern.  Sometimes, and with just about anybody, life can suddenly kick your butt.  It's knocked me down, literally, four or five times already.  But I keep getting back up!

(Finally, my last response from Rich)

Hi, Barry:
Situation is so far, so good.  I post on Facebook to stay active and I do some drawing every day.  Hanging in there, as they say.  Thanks for your concern.
Take care--RICH 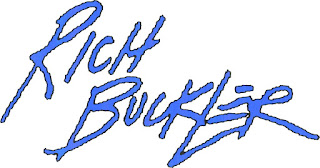