Here is an article from the Long Island newspaper, Newsday, from June 8 1978.  It had Stan Lee on the cover. Also check out a feature from the paper, about how Marvel comics are created, located on the bottom of this blog. It features Frank Springer!

A special thanks to Albert Bigley  at
http://bigglee.blogspot.com/
for prodding me to put this up! Check out his great blog!!! 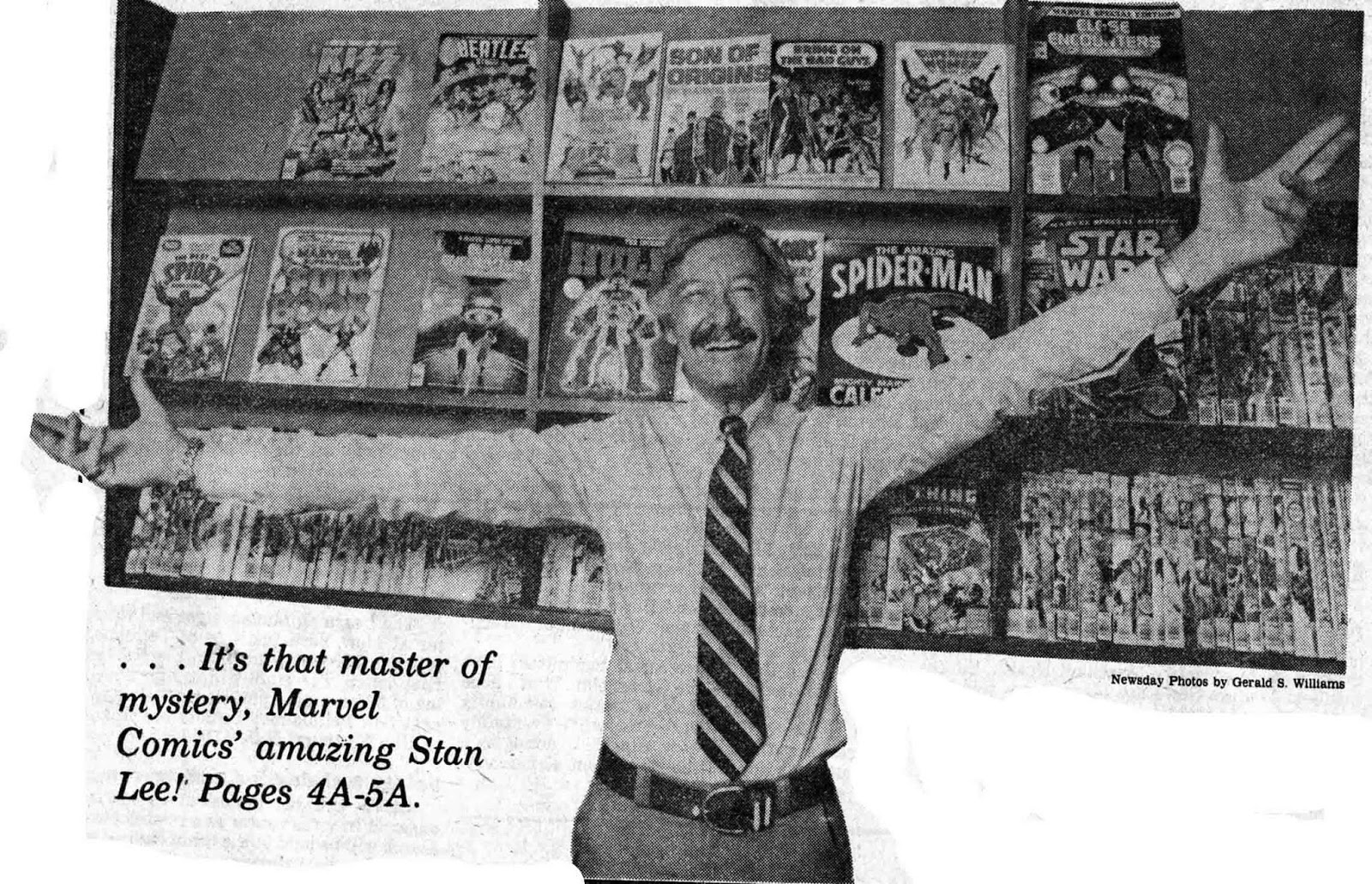 “Here I am in my 50s, and I still wonder what I’m going to be when I grow up and get into the real world.”
Stan Lee—magnetic mogul of Marvel Comics and creator of nearly a hundred comic book crusaders---was musing in his Madison Avenue office. orchestrating the output of the $25 million organization, even as he was affably giving an interview.
In the wondrous world of comic books, Lee has become a byword, idolized by young fans such as those who’ve been showing up recently at Hunting-ton’s Cartoonerville Gallery. During the past , month, the gallery, at 105 Woodbury Rd., has been holding “Six Super Saturdays”—a salute to Lee and the other artists and writers in his Marvel group—and Lee, himself, will appear there this Saturday, from 2 PM to 4 PM. Admission is free.
Serious art collectors have been bidding up the prices of original comic illustrations at New York auctions, but a good part of the Cartoonerville turnout were youngsters often with their portfolios in hand who seem determined to make it big as comic book artists—or as another Stan Lee.
Strangely enough, it was never Lee’s intention to become the wunderkind of comic books. While growing up in the Bronx in the 1930s, he had no more interest in comics than any other kid. His real ambition was to become an actor. But a stint with a WPA theater (with Orson Welles) convinced him that he couldn’t make much money that way.
During spare time in high school, Lee got several writing jobs—one updating celebrity obituaries for a news service (“so depressing because I was writing about living people in the past tense”), another publicizing a hospital (“I could never figure out why. Should I convince people to be sick, or tell them, ‘Hey, folks, don’t use their hospital, use ours!’ “).
At 17, he became a part-time go-fer, copywriter and proofreader for Timely Comics, later to evolve into Marvel It was supposed to be temporary. But a few months later his two bosses decamped, and the publisher asked Lee to fill in as editor-art director until he could find someone old enough for the job. In his book, “Origins of Marvel Comics,” (Simon & Schuster), Lee comments, “Well, working in comics must age a fella real fast because he never did replace me and I’ve been there ever since.” Yet he says, “I still think of it as a temporary job.” 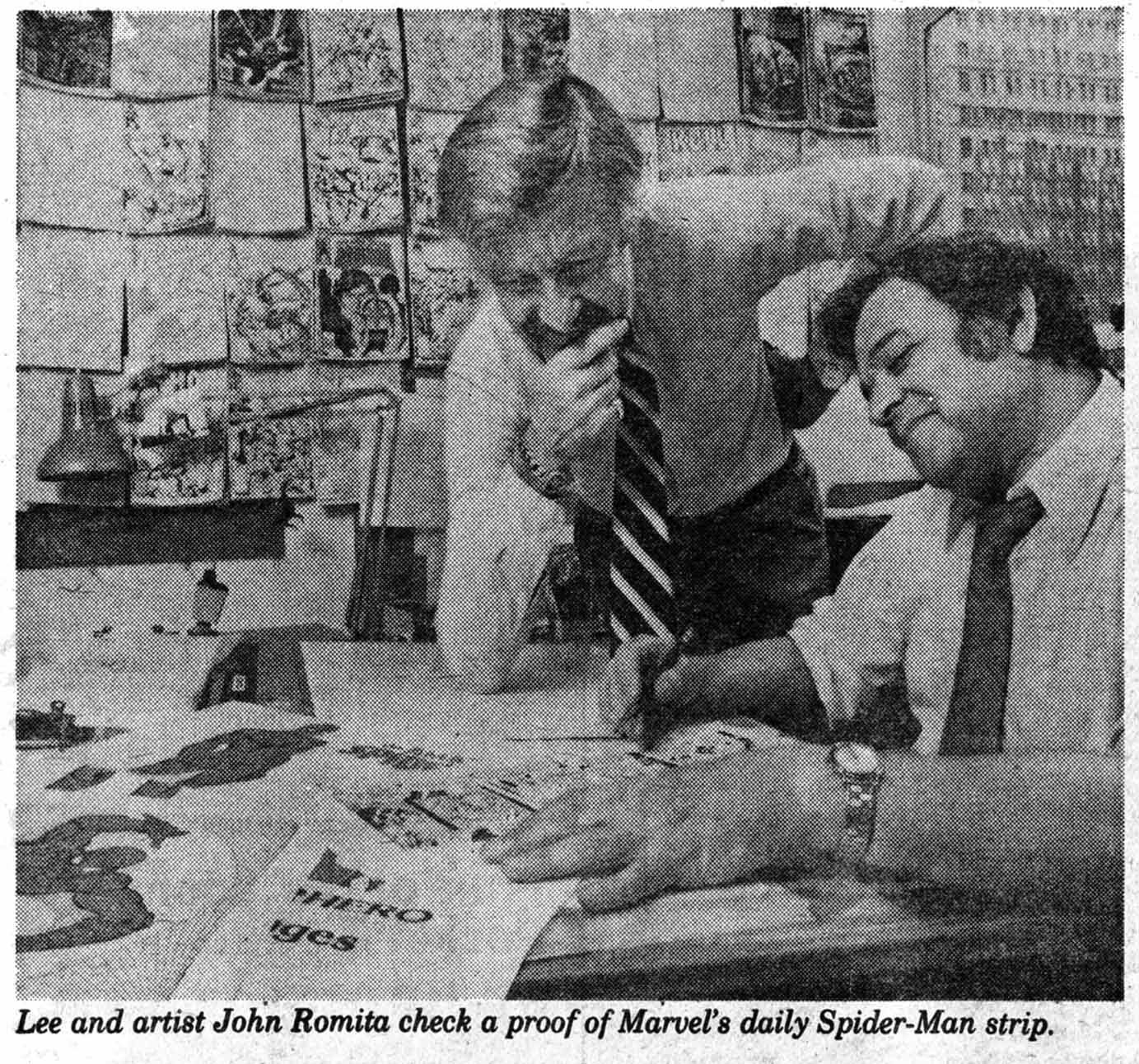 It was Lee’s fertile mind that created the many superheroes who were eventually to make Marvel mighty Among them: “The Incredible Hulk,” “The Amazing Spider-Man,” “The Mighty Thor,” “Captain America,” “Ms. Marvel,” “The Fantastic Four,” “The Avengers,” “Dr. Strange” and “Daredevil.” It was a tiny staff, and by the mid-’60s, as editor, art director and head writer, Lee was turning out four or five complete comic books a week.
At the Cartoonerville Gallery the other day, Lee fan Richard Martin of East Meadow put it this way: “Lee’s incredible imagination rejuvenated a dying industry.” It was Lee who innovated reasonably dimensional characterizations, made the stories more relevant and satirical and wove in subplots. And it was Lee who revitalized the language of the comics, gearing it to a college level while teasing it with alliteration.
Says 24-year-old Rick Gray of Levittown, who developed Marvel mania at age 12: “When I started reading, I would have to sit with a dictionary to understand Lee’s stuff. It’s hard for a kid to understand a word like ‘apocalypse.’ “ Contrary to popular opinion, the demography of comic book readership extends well beyond the pre-teen group. About half of Marvel Comics readers are 15 and older. Says Lee: “In the last two decades, comic books were discovered by college kids, who are becoming a big and important market. Until then, comic book publishers concentrated on the 5-and-10-year-olds.”
What’s the attraction for young adults? Lee answers with contagious enthusiasm. “Everyone loves fantasy. Anything that’s bigger than life, that takes you out of yourself. It starts when we’re little kids, weaned on fairy tales and legends. The reason for the success of ‘Star Wars’ and ‘Close Encounters’ was not, because they’re sci-fi, but because they are fantasy. We try to provide that in our comic books. It’s not that all of a sudden the public likes that sort of thing. But that people are beginning to realize that’s what the public likes.”
Such people, it seems, as television programmers, movie makers and book publishers, who are making Marvel’s future even more favorable. Marvel’s “The Hulk” and “Spider-Man” are already on CBS in prime time, and an animated cartoon of “The Fantastic Four” will begin as a series in September. Universal Studios has an option on another 11 of Marvel’s mythic miracle-makers, some of which are now in development. “Dr. Strange” will be released as a made-for-TV feature film this fall, and, says Lee, the studio is working on “Captain America” and trying to decide what other characters to do. Back in New York, staid Simon and Schuster will soon be publishing “The Silver Surfer” as a 100-page original novel in comic strip form, created by Lee with artist Jack Kirby. Meanwhile, Marvel is grinding out 40 comic books a month, many translated to sell at newsstands from Europe to Japan. 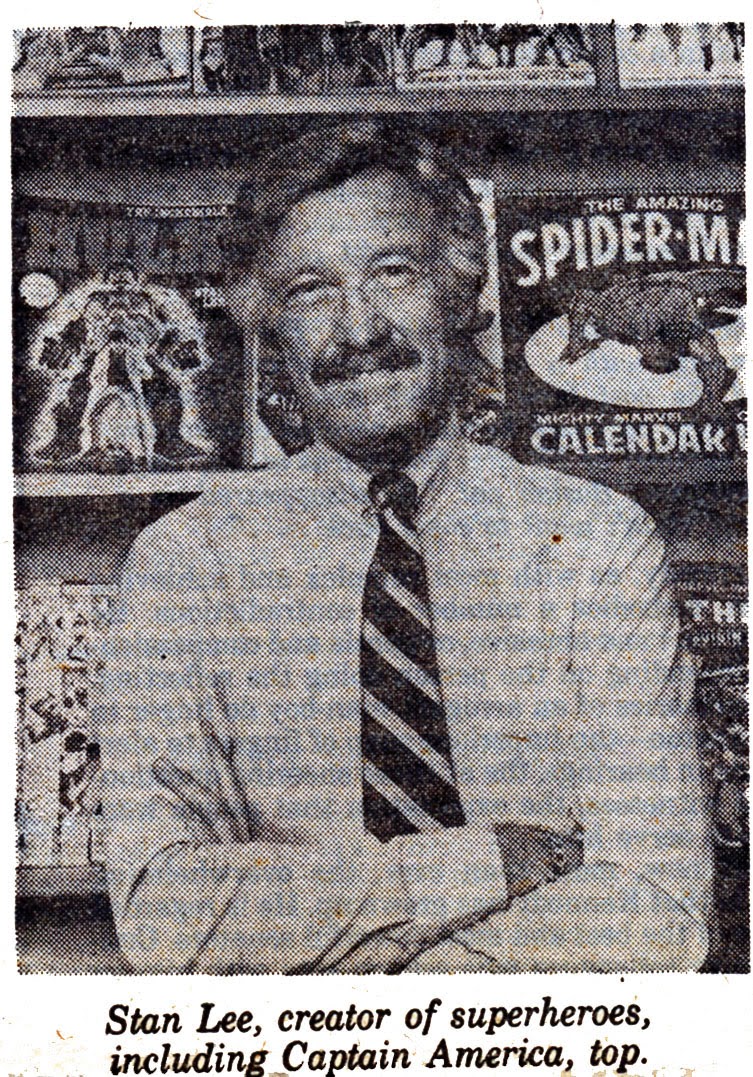 Are there more heroes on the horizon? Not for now, Lee says, just better presentations. The famous firm plans to produce a new line of superhero sagas printed offset on glossy paper which, Lee hopes, will make comic books even more acceptable to an older audience. “They’ll be better physically, more permanent, more like books, and more expensive,” he explains They’ll sell for $1.50. (If you haven’t checked recently, the pulp kind go for 35 cents).
“But breaking into this business is just about as tough as breaking into show biz,” says Avonne Keller of the Newspapers Comics Council. “You don’t need a formal education, but it helps to be a genius.” There are many facets of cartooning. Newspaper strips, for instance, are mainly handled by feature syndicates, which, Keller says, get about a thousand submissions a year. But, she says, there are no guarantees even if a syndicate contracts to take your work out on the road. “If it makes it, great! Some last a year, some last forever. The syndicates have no idea what will take off.”
On the comic book end, Lee says, the writer has the most difficult start, and he advises: “Somehow, you have to get a job on staff—as a proofreader, an associate editor, a production person. Little by little you get to know the editor and he gives you the opportunity to write something.” Free-lance ideas from writers are barely looked at because they are hard to visualize. But ideas from an artist are different. “If you’re really damn good, we’ll find a way to give you something to do.”
Still, as artist Frank Springer warns, “You’ve got to be better than the people they’re using.” Once you’ve been published, he adds, one job begins to lead to another.

Step 1. The Writer. Working with the editor, he conceives a story line and writes a general synopsis without dialogue, broken down into so many finished pages. Writers earn approximately $22 a page, Lee says, and a good writer can turn out a 17-page story in a day or two.

Step 2. The Penciler. The storyline is turned over to a penciler, who interprets the story in sketches. According to Lee, pencilers earn about $47 a page. Depending on their pace and how tightly they draw, they can do one to five pages a day.

Step 3. The Writer. The penciled product goes back to the writer, who adds tightly written dialogue.

Step 4. The Letterer. Now it goes to a letterer, who follows the script and places the balloons and captions. The pay. approximately $7 to $9 a page. Production: six or seven pages a day.

Step 5. The hiker. He takes over, making it sharp for the engraving camera. “The inker does more than just trace over the penciler’s work,” Lee says. “A good inker can improve a penciler’s work and a bad inker can spoil it.” A few pencilers prefer to do both Inkers’ pay: $28 to $30 a sheet, with a production of two or three a day.

Step 6. The Colorist. Photostats are made from the inked copy and sent to the colorist, who indicates to the engraver what color goes where—usually with a magic marker or water color The engraver does the final coloring. A colorist gets $5 a page and can do eight or nine a day

Step 7. The Proofreader. Final step before printing: The proofreader looks over the work for misspellings, anachronisms, inconsistencies. (This is a staff job.) —Early