Steve Ditko and Jack Kirby: Who Created What?

I appreciated so much the wise words of Steve Ditko regarding the five pages Jack Kirby drew of a rejected Spider-Man tale.  The only witnesses to these pages seem to be Mr. Ditko, Joe Simon and Stan Lee.  I have not commented on this, nor have my informed friends because we have never seen these pages.  Never having seen these pages has apparently not stopped many Kirby advocates who seem to know all about these pages. Perhaps that springs from a Jack Kirby interview with Howard Zimmerman in 1981 when he said, “I did a mess of things. The only book I didn’t work on was Spider-Man, which Steve Ditko did. But Spider-Man was my creation.”

These advocates seem to feel that coming up with a title to a character, and a rejected sketch of him, is a complete creation.  Let’s look that that.  Since the beginning of the 20th century, the term, “spider-man” was slang for a cat burglar who climbed up walls and into the windows of homes. As far back as 1934, Ed Wheelen’s comic strip entitled “Minute Movies” had a “spider-man.” character.” Captain Marvel fought one in “Whiz Comics” #87 (1947); “Startling Comics” had one in 1945; and “Beyond Comics” in 1954. There were many more, in fact, Marvel had a few of them in the 1950s, “Uncanny Tales” #26 and “Journey into Mystery” #64.  “Anansi, The Spider-Man” was a popular Caribbean Folk Tale of the 1950s.

Stephen King once said, “Your job isn’t to find these ideas but to recognize them when they show up.” I believe Stan Lee when he said he got an idea one morning to do a super-hero named “Spider-Man,” I just don’t think the name came completely out of the blue.  The Jack Kirby drew five pages that were rejected. Much to my chagrin, and with some fatigue, at this point I must remind people that I am a huge Kirby fan. However, many Kirby advocates feel that you are either all in or all out; there is no middle ground for your admiration of him.  Kirby did so much, just not for Spider-Man. Perhaps his biggest contribution here was showing Lee and Ditko what not to do. Jack Kirby drew five pages that were rejected. It would be like giving Derek Jeter an assist after he struck out and Arod hit a homer.

There are aspects to a comic’s popularity, both artistic and commercial, that are just not analyzed enough by those outside the field. We are not just discussing the look of a character but the reasons for its success. To imply that just coming up with a name, or even a costume, made a series so successful is ridiculous. Ditko just didn’t create a new, unique looking Spider-Man; he created all the important elements that lead to its success. 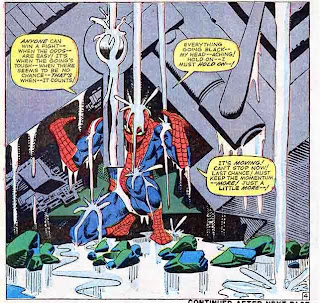 Let us look at what Steve Ditko, with Stan Lee, gave us:
The Character of Spider-Man: Steve Ditko gave us a great costume, of course, but he also gave us the unique look and movement and poses of the character. And the Spider-Signal!

The Characters of Spider-Man: Where else in comic book history, do you get so many interesting and well defined characters in 25 issues?

A hero’s secret identity is always the first supporting character. This is because he is always someone who is different from the hero. Clark Kent was different from Superman and Bruce Wayne was different from Batman.  Peter Parker was shy and quiet; he was a “wallflower” and a “bookworm.” Spider-Man was none of those things.  Lee and Ditko developed Aunt May, J.J.J., Betty, Ned, Flash, Liz, Frederick Foswell, Mrs. Watson, and Almost Mary Jane. Then toss in Curt Connors and Professor Smythe. Where else do you get that in two dozen issues of any comic? And each one could be and often was a centerpiece of any story.  Dr. Strange had the Ancient one, and Peter had the older Aunt May. Both elders wanted their younger charges to confide and take advice from them.  What a contrast, Dr. Strange did and Peter didn’t.

Mood and Environment. Mr. Ditko set the mood of these stories from the very beginning.  Although the stories took place in New York, this was NOT the same New York that the Fantastic Four lived in. Ditko’s was often dark and moody; it often was raining or looked like it just had been. Kirby’s city was bright and shining, Ditko’s was often dark and mysterious, like a film noir movie. 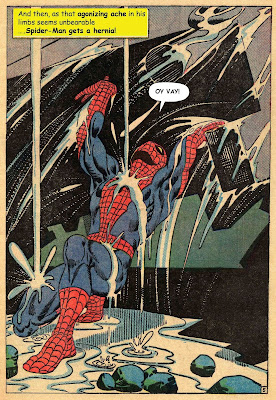 Of course the Villains: Where else do you get Doc Ock, The Vulture, the Molten Man, The Green Goblin, Mysterio, The Molten Man, The Enforcers, The Big Man, The Sandman, The Spidey-Slayer (robot) and the Lizard in 25 issues? Even Mysterio, not one of the most powerful villains, is drawn so spectacularly that he fits in perfectly. The concepts and personalities of these villains were priceless and their illustrations were timeless.

Last but not least, the actual stories: Using the elements mentioned above, Lee and Ditko wove together the various elements and gave us a tapestry of stories that were compelling, unique and addictive.  And issues #26 and #27, “The Man in the Crime Master’s Mask!” were even startling. 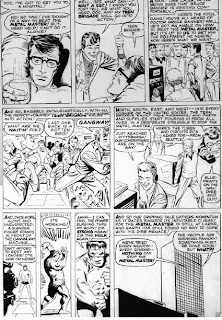 So just coming up with a character is not enough. Let me give an example:  In his comics, Kirby externalized the quest for knowledge, Ditko internalize it. On a journey to the Infinite Kirby took us to the outer reaches of the universe. On a journey to find Eternity Ditko took us into the minds of the Ancient One and Dr. Strange.  With the Incredible Hulk Lee and Kirby created a creature that turned from man to “monster” by peripheral events: A bomb blast, the sun setting and finally a gamma ray machine. It failed after six issues. It was Steve Ditko who internalized the situation and gave Banner an anger management problem. Now Banner, himself, was the cause of the change. This is what made the Hulk and iconic character. While Kirby look outward to cause the change, Ditko looked inside the person and made him a successful and unforgettable character. This unique insight has made all the difference, for all of Ditko’s characters. It’s not just the costume.
. 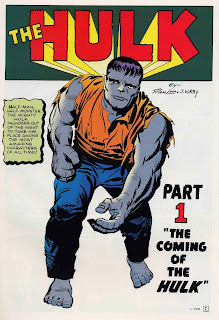 Certainly Lee and Kirby created Sgt. Fury, S.H.I.E.L.D., Hydra and Baron Strucker. In Strange Tales #135, Lee and Kirby placed Nick Fury, a blue collar fish out of water, into his leadership at S.H.I.E.L.D. Yet it was Jim Steranko who mixed up these ingredients and gave us the sophisticated, man of the world, Nick Fury that is still around even today. Steranko also elevated Hydra, formally a “villainous group” used just to introduce S.H.I.E.L.D, and gave it a Nazi past and a great future by making it so technically advanced. It was Steranko’s Hydra that we saw in so many Marvel Comics and the Captain America movie.