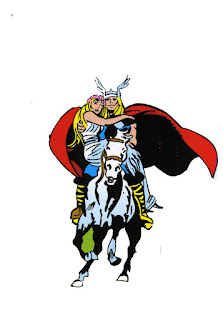 Why Jane Foster cannot become an Immortal such as Thor!!!!

First let me present a couple of preconditions:

1.   I am a fan, follower, student and prisoner of the Marvel Age of Comics, 1961-1977. This was an incredible era where the creators, Stan Lee, Jack Kirby, and Steve Ditko (Later followed by Roy Thomas, Gene Colan, John Buscema and John Romita) created an set the rules for a universe of characters. Don’t tell me what changed and what came much later.  In my world retconning doesn’t count.

2.   Movies are different than comics. So long as the character of the character remains intact I am generally satisfied. For example, James Bond was a heavy smoker and fought communists. Daniel Craig did none of that, yet he remained true to the Bond character. This was not true for the  first movies of Thor.

3.   This has nothing to do with Natalie Portman, a fine and beautiful actress or Chris Hemsworth.  It has to do with the story.

Thor was introduced in the movies (“Thor” and “Thor, The Dark World” played by Chris Hemsworth) he was already Thor, The God of Thunder. Not so in the comics, where he was originally, mortal Don Blake. .Frankly, I was not a fan of the first two Thor movies partially because this Thor was not my Thor. He was very different from the character Stan Lee and Jack Kirby created in 1962. And Jane was very different here too. In the movies is an astrophysicist, not a nursing assistant to Don Blake, Thor’s alter Ego. 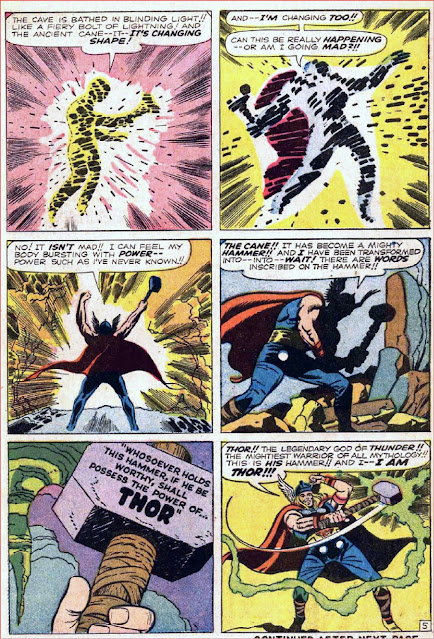 Originally, in Journey Into Mystery #83, Don Blake, a slight “lame” doctor, who walks with a cane, finds a stick in a cave.  Striking it onto the ground he is turned into the God of Thunder, Mighty Thor. In the beginning, the premise is that mortal Don Blake only gains the power of Thor. But as time goes by, Thor, his history and family, is absorbed more and more by Blake. 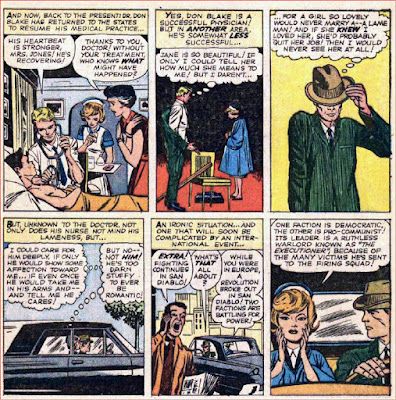 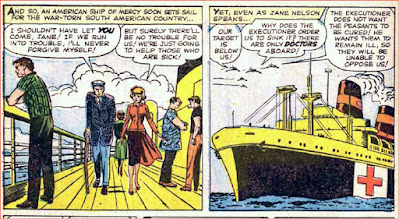 Jane is introduced in Thor #84 as Blake’s nurse, Jane NELSON.  The pair obviously have crushes on each other.  But is this Jane Foster? Probably, readers may disagree. Jane FOSTER, with a different last name and different hair coloring is introduced in issue #88. The pair have a traditional Marvel comic book, “almost romance” where both like each other but never admit to each other. 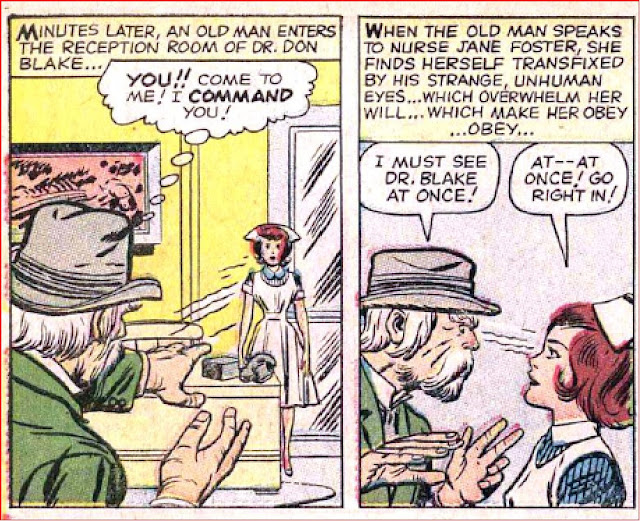 From the beginning until issue #101, the Thor stories have rotating artists and writers, (Don Heck, Joe Sinnott, Robert Berns and Larry Lieber are among them). 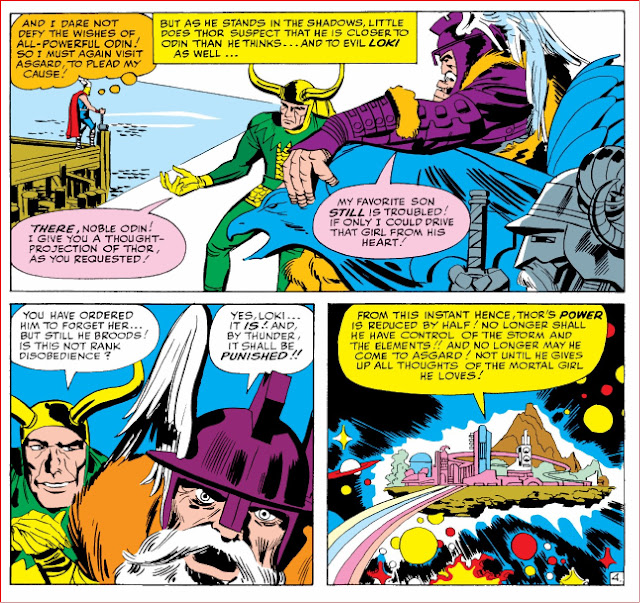 Jack Kirby creates Tales of Asgard in issue #97, which introduces a great many supporting Asgardian characters, and then takes over the main story artistry with issue #101 and plotlines change. Thor now wants to spend time with Jane and she with him, although she does not know his identity.  Beginning with this issue, Odin disagrees and begins punishing Thor (which he will often do)  for his commitment to Jane.  This is a theme that last a few years!!!!!

In real life, Kirby’s and Lee’s storytelling had changed radically. Thor was no longer on Earth fighting mortals such as Mr. Hyde. He was now in outer space and in Asgard fighting incredible menaces.  As Don Blake became more of a background figure, Lee and Kirby could no longer easily fit Jane Foster fit into the storylines.  So to find a partner for Thor, Lee and Kirby had to find an end to the romance of Thor and Jane. 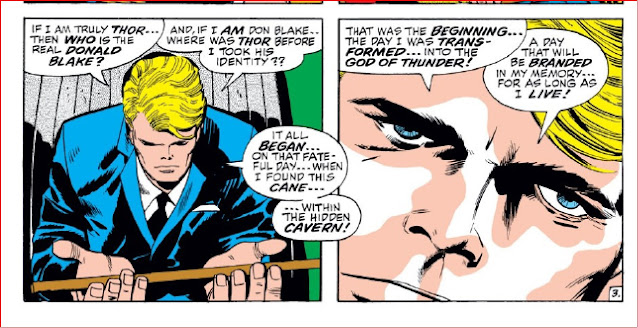 The relationship between Thor and Don Blake is explained in Thor #158-159.  Brilliantly done, Don Blake wonders about his past and his connection to Thor.  As readers we were NEVER given insight to the back story of Blake. 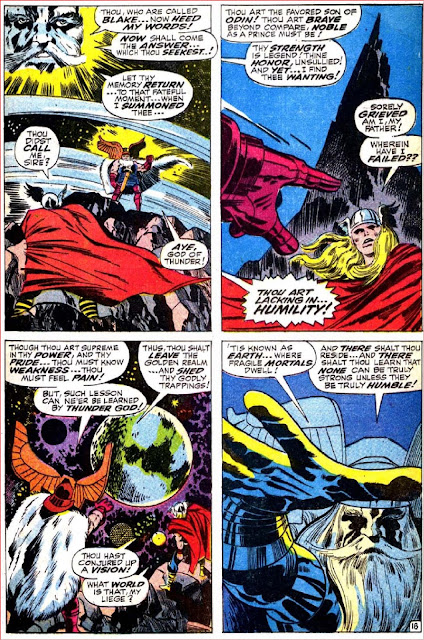 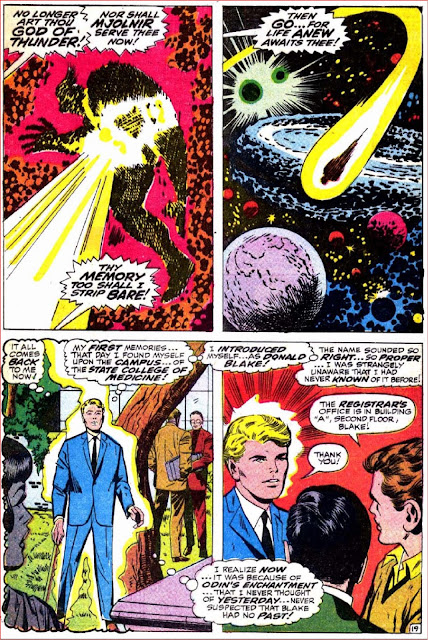 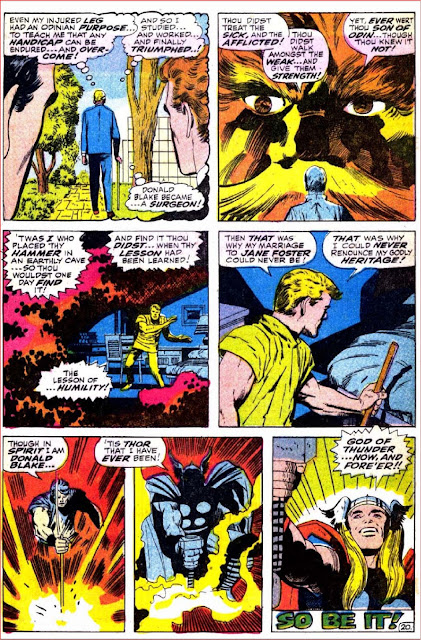 As Blake wonders, Lee and Kirby reprint the origin of Thor EXACTLY as it appeared in Journey into Mystery #83. In other words, this was not going to be a “retcon.”  Then, in issue #159, Odin explains that he was ALWAYS Thor, but was sent to Earth to learn humility. As such, Odin “created” Don Blake so he can learn to be humble. In fact, he gave him a disability so he could learn to live with it and that disabilities can be overcome.   He was always Thor, Don Blake was the “fantasy!” 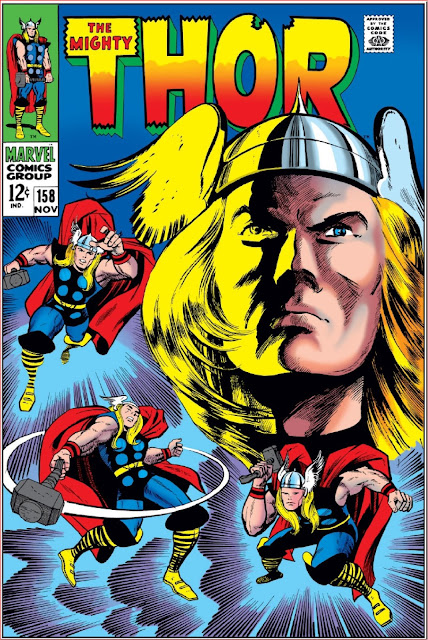 In Thor #136, Odin relents and allows the relations hip to continue.  Odin brings Jane to Asgard .“To Become and Immortal.” 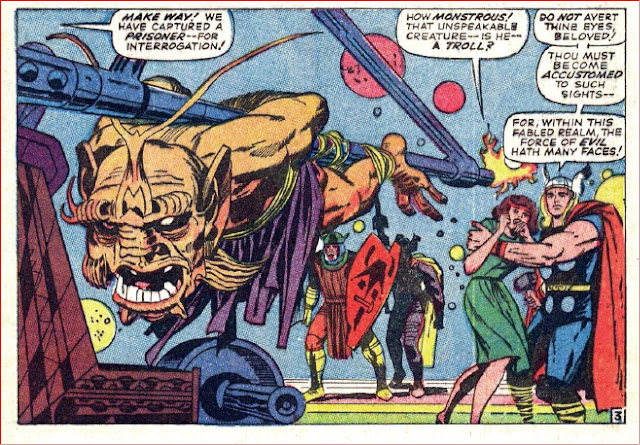 Well, gentle Jane doesn’t like it. She was used to cooking dinner, not killing it. She was a mortal, used to Earthly sites, not the monstrous ones on Asgard. She begs to go back to a normal, Earthly, life. 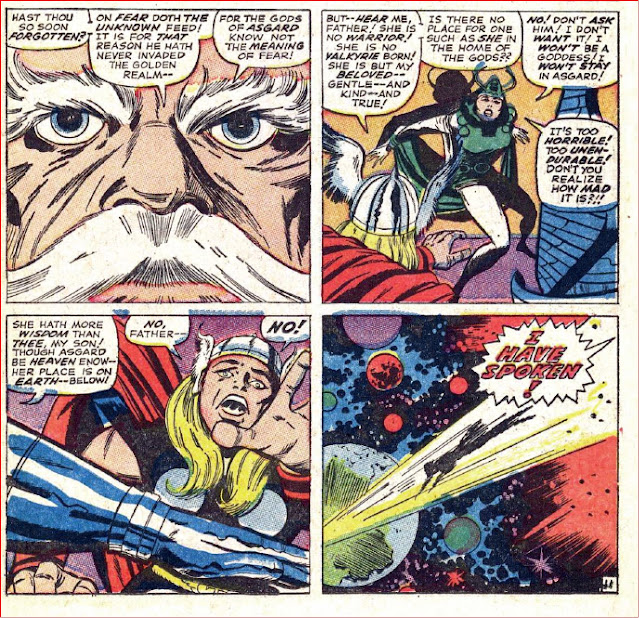 Odin then grants her “the gift of forgetfulness” as she returns, contently, to nursing, be unable to call to mind Thor and Asgard. Let to the readers is the concept of Odin never really thought she was a match for Thor and this way he could prove it. 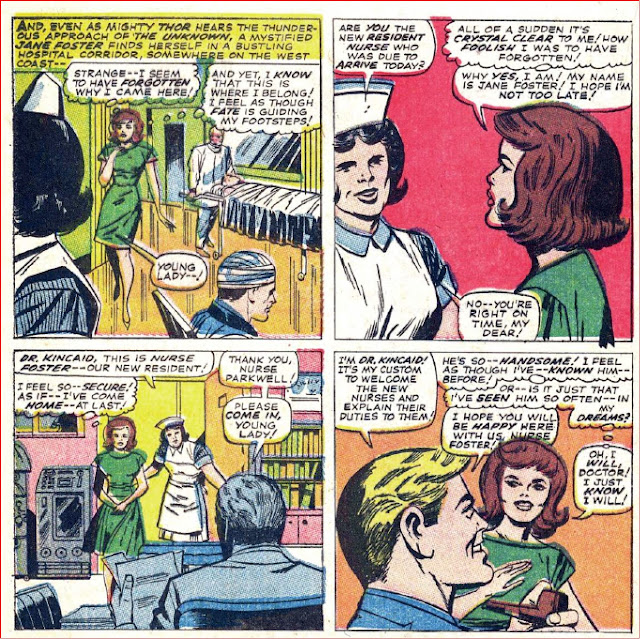 Odin, who cannot control matters of the heart, sets the time and setting for Thor to meet a grown up Sif and they begin their relationship. 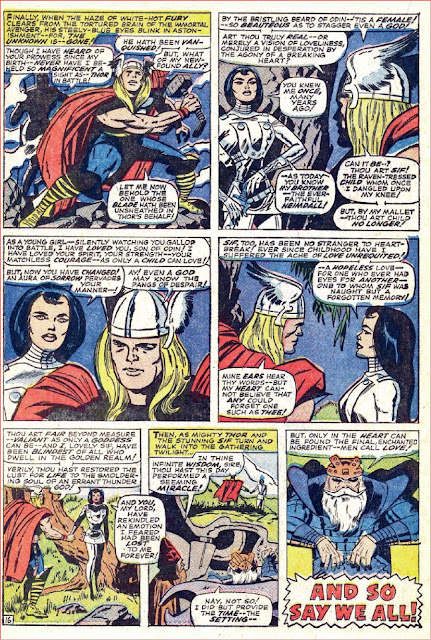 So Jane will not become an Immortal because she does not want to be!! 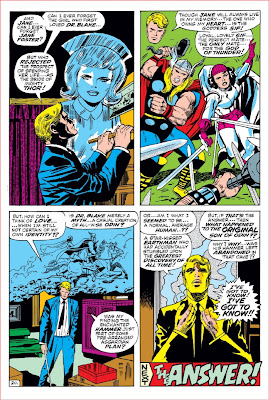 And although Thor finds that Sif is the only one for him, he does, from time to time, think of Jane.
Posted by Barry Pearl at 12:48 PM No comments: