This is not your father's Guardians of the Galaxy: A Review

For The Blu-Ray/DVD review of
Captain America: The Winter Soldier
Or Three Days of the Falcon
(You see Robert Redford starred in the Spy-Thriller
(Three Days of the Condor)
But this one has Sam Wilson)

The Captain America movie fits right into the Marvel Universe. But, unlike Guardians of the Galaxy, it expands and helps define the movie version of it. It also changes events on the TV show, “Agents of S.H.I.E.L.D. and makes it better….
See the full review at:
http://comicbookcollectorsclub.com/captain-america-the-winter-soldier-or-three-days-of-the-falcon-a-review-by-barry-pearl/

This is not your father's Guardians of the Galaxy: A Review from someone who bought the original when it first came out. 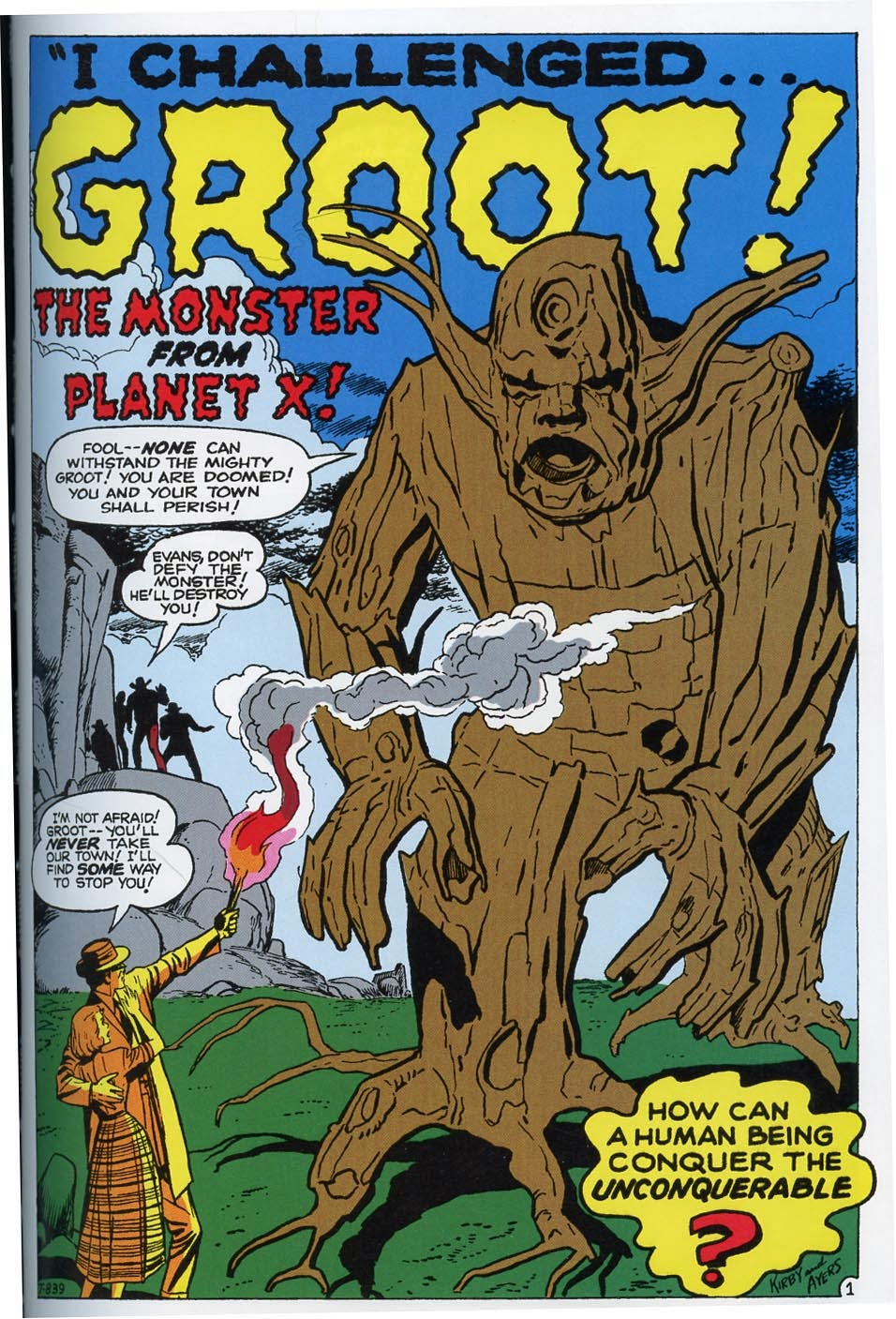 This is not your father’s “Guardian of the Galaxy!”

Nor is it his type of review. For that you can go to Rotten Tomatoes.

This is a review from a student of comics, mostly, 1961- 1977 who will not discuss spoilers, but will try to place this within the frame of the current Marvel Movie Universe.

First, it fits right in.


My guys would NOT fit in, partially because they would be in the wrong time frame.  My Guardians were introduced in 1968 in a story written by Arnold Drake and illustrated by Gene Colan. In the distant future, 3015 AD,*the Badoon (From Silver Surfer #2) have taken over a large part of the Galaxy. Four people from different planets unite to fight their common oppressors. Their members are: Charlie 7, a human genetically engineered for strength and invulnerability; Martinex, a crystalline entity who can survive the Plutian atmosphere; Vance Astro with psionic powers and Yondu the last of his race, a hunter of the Zatoan tribe of Centauri IV.

Roy Thomas: “Guardians of the Galaxy,” which somehow grew from an idea of mine about a future in which the Russians and Chinese had conquered America into a space story…(It didn’t make)  any great impact, 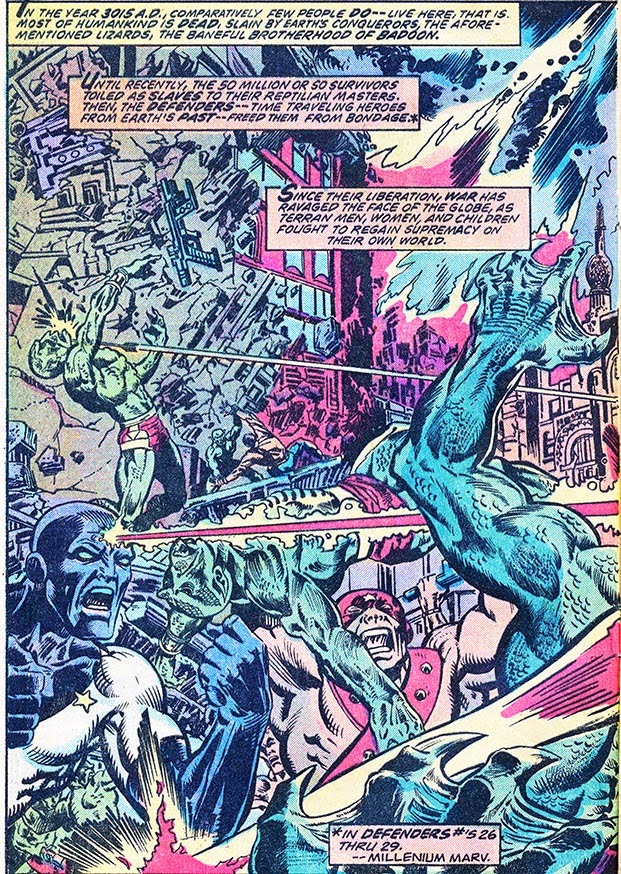 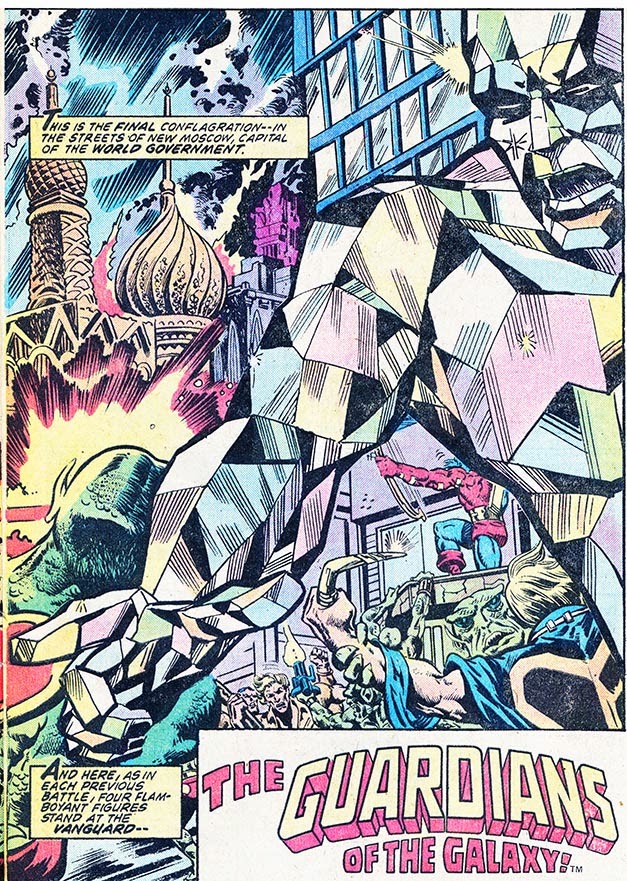 Only two characters come from my “time.” Star Lord appeared in Marvel Preview # 11, 14-15, as part of Marvel’s mid- 1970s black and white line. He was a noble character out to save slaves and planets and nothing like the character here.  Groot, another eternal Lee and Kirby creation originally appeared in Tales to Astonish #13, November 1960. An alien tree-like creature, Groot came to Earth to capture humans for experimentation. Not a nice guy.

The Guardian movies take place now, not in the future, with threads to the Thanos revelation in the Avengers movie. But this movie, thankfully, is very self-contained, you need not know anything about the Marvel Universe to enjoy it. And if you know the Marvel Universe, the references are there and entertaining: The Kree, Ronan the Accuser, the Nova Force and much more.

The film is directed and co-written by James Gunn, who clearly had a great vision for the movie. It aligns with the M.U., but looks nothing like the Avengers, Iron Man or Thor. Chris Pratt, Zoe Saldana, Dave Bautista, Vin Diesel and Bradley Cooper star;  John C. Reilly, Glenn Close, and Benicio del Toro have long cameos. The casting throughout was perfect, except for Vin Diesel:  he appeared a bit wooden. J

It also doesn’t sound like a M.U. movie.  Instead of using a new music score, most of the soundtrack consists of 1970s music. And that point is worked in the actual storytelling in an intriguing way. I saw the movie in Imax 3D and it has the best 3D effects I have ever seen. The visuals were just outstanding and the surround sound was used to its fullest.  Other than the first five minutes, nothing in this movie takes place on Earth and the extraterrestrial landscapes are imaginative and beautiful. The outer space shots are also outstanding. 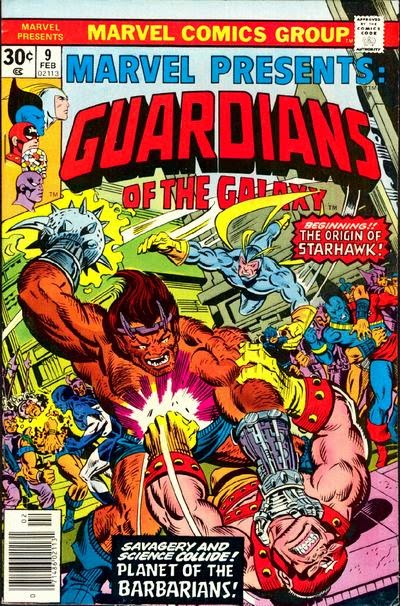 Major pluses:
One minus:
Too many of these movies are about the end of the world.  Enough!!!!!!

The movie ends by telling us that the Guardians will be back, but wait until the end of the credits before you leave.

*After Disney
Posted by Barry Pearl at 6:31 PM 4 comments: