This is all Roy Thomas’s fault. In 2008, he made a funny, causal comment saying that he’d like to see Stan Lee do a Stand Up comedy act.  So, I sent Roy these very bad jokes. So while I am on a summer hiatus I thought I’d put them up.  So please blame Roy if you don’t like them!!!!

“Fans always asked me about the  Hulk and his cloths.  When Banner changed into the Hulk his pants stretched.  When he became Banner again, what kept his pants up? That’s easy, the Comics Code!

And who wants to be the Thing? Last month he had was a victim of
identity theft. They called two weeks later and wanted give it back! He wouldn’t take it!

Who stole the identity? The Wizard. The Wizard started the Frightful
Four, but Paste Pot Pete was the glue that held it together!

Hey, and what about Clint Marko: Being the Sandman is no day at the beach…well maybe it is a little bit.

Take the Ant-Man Please. And what's the buzz on the Wasp? They not only talked to ants, they played Jeopardy with them.  And they did better than me!

And what about the Human Torch and Toro—A match made in heaven. Or at least, matchsticks make in heaven. 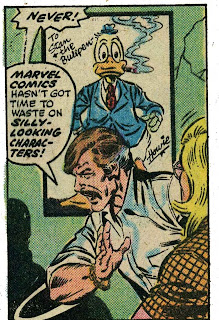 People talk about the Silver Surfer. Kirby gave him form, I gave him
substance. But neither of us gave him pants!

And take Tony Isabella. They ruined Black Lightning for him. So he
is starting a new strip: Jewish Lightning. His only problem, on
Saturdays someone has to come in and turn on his lightning!

Bruce Banner goes into his doctor: Doc he says, every morning I get up
I have a great headache. The doctor says, Bruce, how any times do I have to tell you, when you get out of bed it's feet first!

Don Blake goes to the Doctor: Doc, my leg hurts what should I do?
"Limp"

Dr. Strange called his assistant to tell him he’d be late for dinner, but got the Wong number.

At DC all the super-heroes had to have secret identities all of them,.  Even their pets.  Batman’s dog even wore a mask, so the other dogs wouldn’t recognize him and threaded his family! Don’t ask don’t smell. The Elongated Man revealed his identity and still wore a mask. Now that’s stretching it!

You ever notice that during the Marvel Age, all heroes had to be single when they got their powers? Peter Parker, Sue and Reed, were all single. It’s called getting powers without a hitch!

What’s up with Superman coming to earth: The planet is exploding and they have
minutes left to live. Jor-El tries to put his wife and child into the rocket ship. She
refuses, with just minutes left to live she says. “My place is with you, Jor-El.”
At Marvel we would have Jor-El say “Alright, you stay; I’ll go.”

Poor Iron Man: in Tales of Suspense #56 he is fighting the Unicorn, having heart problem and does not answer The Avengers call. So what do they do? Suspend him. From what? Their baseball team?  Do The Avengers meet in the mansion and play pool together? No, he is suspended from saving the  Earth from total destruction. Do they also withhold his pay?

At Marvel How come villains recruit new villains, How come the good guys don’t recruit? Why are they so far behind? Wouldn't 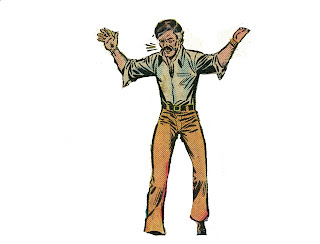 they be trying to employ costumed, super powered good guys? It would be great to see a costumed hero punching in at the beginning of a shift. He could fight for truth, justice and health insurance!

Hey, you notice how much longer stories are these days: In fact, if they re-re doing John Buscema’s book and calling it “How to Draw Out Comics the Marvel Way”

Whenever we wanted to have two heroes on the  cover fighting each other we used Mind Control.  The Puppet Master and the Mad Thinker were great at this. But Diablo was the best he had Dragon Man. Dragon Man was a statue!  That’s right, Diablo used Mind Control on creatures that didn’t have minds.

And finally Tony Stark.  For his first ten years he fought the cold war. He kept  fighting Khrushchev and Russia. That’s right; the man with no heart in a tin suit paid no attention to the man behind the Iron Curtin.” 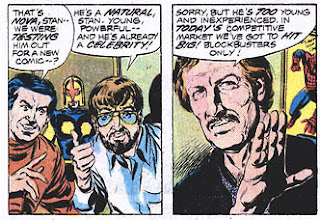