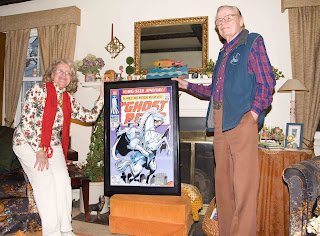 After a long wait, the first edition of the ORIGINAL Ghost Rider western series arrived at my door. As a surprise, the Incredible Tony Isabella wrote the introduction.  Few people know that Tony’s first name is “Incredible” as he was named after the Hulk. 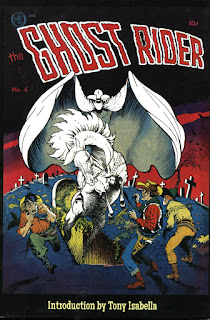 Many readers are only familiar with the Marvel versions of Ghost Rider. Their first one was a western, the second and more famous one, is the super-hero on a motorcycle.  But, from 1949-1951 Magazine Enterprises, owned by Vin Sullivan, published the first Ghost Rider, a western drawn by Dick Ayers, who would go on to draw Marvel’s first Ghost Rider in 1967!! 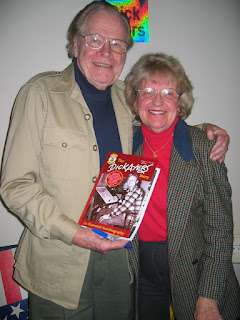 Dick Ayers: “Vin Sullivan told me The Calico Kid (introduced in issue #6) was becoming The Ghost Rider (issue #11). Some renegades were to overpower (him) and his assistant and kill them. They would meet the spirits of successful famous lawmen in Purgatory who would teach The Calico Kid their superior skills. The publisher had the first script written and The Ghost Rider debuted in 1949 as a backup feature in Tim Holt. In developing the character … Sullivan told me to think about The Headless Horseman by Washington Irving, and also asked me to draw The Ghost Rider thin and lanky so he would appear “ghostly”…The Ghost Rider also utilized this black lining to completely disappear into the darkness just like The Shadow... I also suggested that Ghost Rider use ventriloquism—another Shadow specialty.” He went 14 issues, but appeared in 58 other comics.” 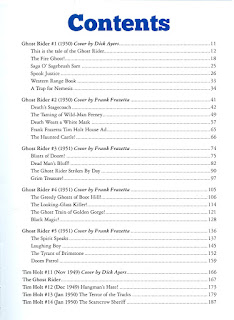 When trademarks expire, names and even characters can become “fair game” for other publishers to use.  In February 1967, with Dick Ayers as artist, Marvel began to publish another western entitled Ghost Rider. Dick Ayers, “Stan Lee assigned me to do a new Ghost Rider series. The character was changed but I drew him in the same costume.” It told the story of Carter Slade, who was left for dead by evil cattleman. Flaming Star, the “local” Comanche medicine man tends to Carter and he gets better. Carter is given some “mystical” devices, luminescent substance that could be used to make clothing, guns, horses and suchlike glow in the dark. He only lasted seven issues.

While we are in a “golden age” of comic reprints had been missing a great deal of the 1950s material. While EC is an exception with almost everything available, DC and Marvel have lagged behind in 1950s material. PS publishing has recently done 70 volumes from that era including works from ACG, Harvey and Avon among others. “Crime Does Not Pay” is also being reprinted.  However, three genres from the 1950s are sorely missing from all companies: western, war and romance. Even PS Publishing has bypassed these genres.

(When I write on the web, I have learned you can’t write, (briefly) in generalities because someone always has to show they know more than you!!!!  Among the 30 or so Masterworks from that era, Marvel did two volumes of Rawhide Kid and one war, Battlefield. However, Marvel had many war and western titles at that time.  DC has done four Sgt. Rock volumes and some black and white Showcase editions of their war and suspense comics. 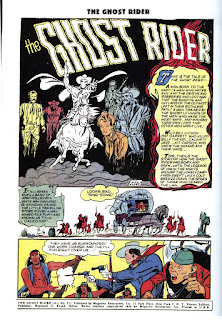 In the beginning of The Marvel Age of Comics (1961) there were basically two writers (Lee and Lieber) and four artists (Kirby, Ditko, Heck and Ayers) who carried the load. (There were a few others!!!)  Even back then, I thought DC had a house style for artists and anyone who did Superman or Batman had to make sure that the characters looked much the same.  I never thought that of Marvel.  In my opinion Marvel had a “house” layout (Jack Kirby’s, of course) but their artists could personalize their art. Don  Heck and Dick Ayers were not as innovative in their styles as Kirby and Ditko, but were wonderful storytellers and fine artists and they very much brought their own vision to their illustrations. That is why I felt they did their very best, not on creatures from outer space, but on REAL people in romance, westerns and war comics.  Ayers excelled in the last two. The Ghost Rider stories in this volume are great examples. Dick Ayers liked to tell a story at his own pace and the Marvel method was ideal for him.  In his later years we became friends and I, along with Nick and John Caputo and Mike Vassallo visited Dick and his  lovely wife Lindy in their house in Westchester, near Professor's X's school for exceptional children.  Dick never ran out of funny and great stories about him and Stan Lee and how much he liked working with him. 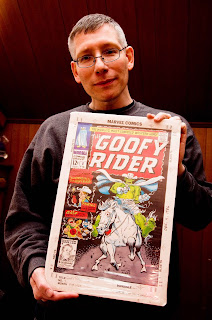 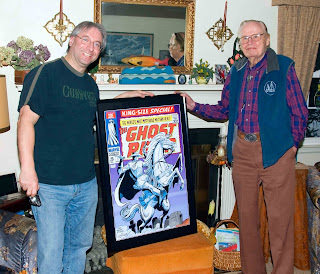 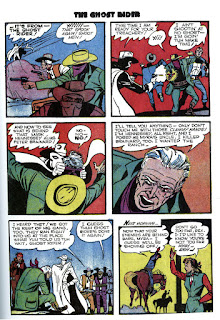 These Ghost Rider stories actually start in “Tim Holt” Comic #11, (1949) when his origin is given. And faster than you can say “Amazing Spider-Man I and II” the series is rebooted in “Ghost Rider” #1 (1950).  The second version uses much of the first origin but expands it into a supernatural world where Rex Holt meets famous dead western heroes. Fortunately, those first stories are included here, but are featured last, after the first five issues from Ghost Rider. I guess they want you to get “fixed” first on the second incarnation.

While Rex Holt, Ghost Rider does not seem to have supernatural powers he tries to convince all the bad guys he does by speaking in word balloons that have more ridges.

In many ways he reminds me of the Shadow, although he does not cloud men’s minds, but does raise some dust and often speaks in that "otherworldly" and "all knowing" tone. 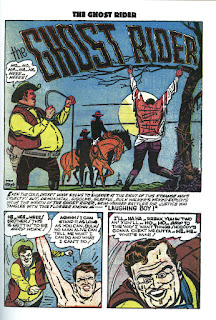 These are not modern comics with modern story telling. There is little to no continuity and each story stands on its own. After the origin story you can read the stories totally out of order.  There are flashes of violence but none that are severe. None are gratuitous, they are always used to advance the storytelling.  Still these are pre-Comics Code stories and it shows. . These are fun stories but don’t try to read them all at once, they get repetitive.   Stretch the book out a couple of days.

The reproduction, the print quality is okay to good, but certainly not exceptional. Sadly, with so comics from so many companies no longer with us, the original artwork, or original photographic plates have long since disappeared. This is the best we will get, scans from the original comics, which originally may not have been printed that well to begin with.

As with so many comics of that era, you may cringe a bit at the portrayal of some Native Americas (called Indians here) and of his “sidekick,” the Asian Sing-Song. Sing-Song is probably the smartest person here, but speaks in broken English throughout the run. I think he is related to Chop-Chop. But Ton is right again when he says, “Take these stories for what they are.”  They are just fun to read. 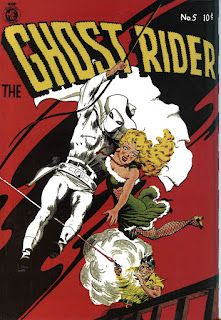 Ghost Rider’s In the Sky

One more note: Take a look from time to time of the Ghost Rider on his horse. It doesn’t fly, but is drawn that way.  Using shadows, and “disappearing” background, in both versions, Ayers draws the horse as if it is totally off the ground.

Dick Ayers told us a “Goldilocks” tale involving Tony.  Ayers said he would get scripts from certain writers and they were too long and detailed and he couldn’t tell the story at his own pace, he had to squeeze everything in. Others would give him summaries that were way too short and without substance and he felt he had to make up too much of the plot.  But Tony? Tony’s were just right and loved working with him.

You can see Ayer’s wonderful pacing in the telling of these stories. Nothing seems rushed.

There was one thing I didn’t see in the comic books but saw in the actual artwork, which he had in his home. Incredible detail!!! It was just wonderful, but it didn’t show up well or distinct in the comic book reproduction. 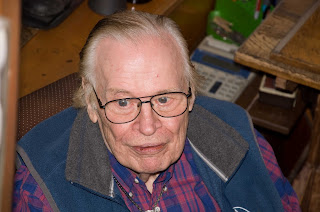 Dick’s inking was superb and he was just the right guy for the beginning of Marvel’s Age. His consistency linked the characters that were being drawn by different artists.  He placed them all in the same “universe.”  I think that is too often forgotten. 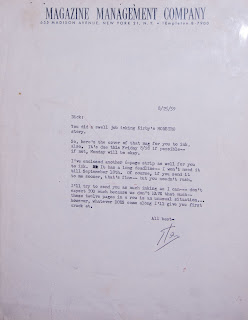 In regards to writing about comics Tony is unique as far as comic book creators go. He has the heart of a fan and can write as one, not just as the “all-knowing insider.”  Tony was obviously excited to see these stories go into print. His intro here is just right. He gives the history of the strip and tells you what to look for in the stories.Tony  had also included the first Ghost Rider comic in his wonderful, informative and fun “1000 Comic Books You Must Read!!” Now Tony only has to do 999 more introductions. 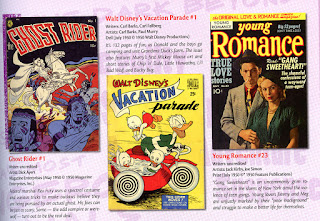