Just to fill you in…
Superhero comics were a product of the depression and their popularity had waned by the early 1950s. Only characters from the DC Universe - Superman, Batman, and Wonder Woman - remained on the newsstands, with Batman on his last legs. 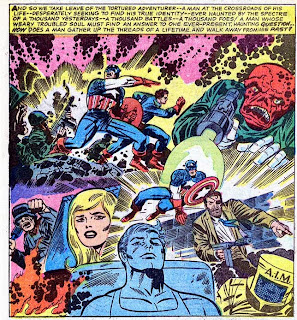 The original Captain America, published by Timely Comics (now Marvel), was cancelled in 1950. He was brought back for a handful of issues in 1954, but then went under again.

Spurred by the success of DC’s Justice League, Marvel re-entered the super-hero field in 1961 with the Fantastic Four. Then Marvel introduced most of the heroes we know today, including Iron man, The Hulk, Ant-Man, and Thor. In 1963 the new heroes were combined into a group called “The Avengers” and with issue #4 re-introduced Captain America. As he did with the Fantastic Four’s Human Torch, Stan Lee, writer and editor, erased the blackboard of previous continuity and treated Cap as a new, not established character. Marvel’s new Captain America had his past redone. Yes, he had been given the super solider serum, but unlike Timely’s original model, this Cap would not make it to 1950.

While saving the world in 1944, the story goes, he was caught in an explosion over the ocean and frozen in a Capisicle for 20 years, then found and defrosted by the Avengers in 1963. 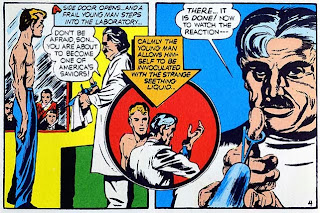 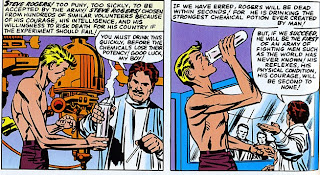 The complete story of these events are best told by Roy Thomas and John Buscema in Avengers #56, 1966.

Since only 20 years had gone by, Cap was able to reunite with old friends, including Nick Fury and his former girlfriend, Peggy Carter. Peggy, now two decades older, thought that Cap was long-dead. Soon Cap would meet her sister, Sharon Carter, a SHIELD agent, and a romance began. This begins in Tales of Suspense #75 in 1966, and Sharon would be known for years only as SHIELD Agent 13. (Remember when Barbara Feldon was known only as Agent 99?) Sharon’s resemblance to her sister is so great it causes Steve Rogers to reminisce about the woman he met and lost during WWII (Peggy). She was then a French resistance fighter who got amnesia, ending their brief romance. 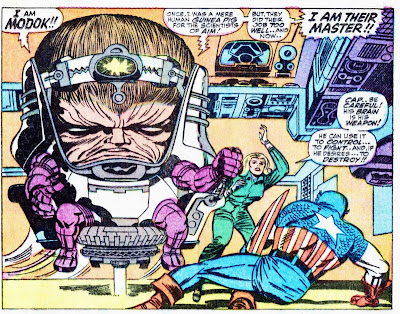 Not always a regular in the comic, during the first few years Sharon is usually the very strong damsel in distress, sent out on various SHIELD missions (against Modok, Batroc, The Red Skull, etc.,) with Cap invariably turning up to rescue her. 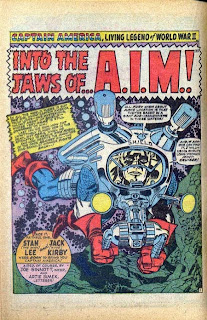 It takes until 1973, in issue 161, for the relationship between Sharon and Peggy to be more fully explained.

50 years later:
There is a newer Marvel Universe and it is on our movie screens. To make Cap current, the story has him frozen for 70 years and waking up in the year 2011. Although aging in comics is a funny and inconsistent concept, Cap’s WWII buddies and girlfriend would be too old to be the supporting characters they once were. Samuel L. Jackson is the new Nick Fury. This Fury was not around in 1940 and Marvel cements him firmly in their current universe. 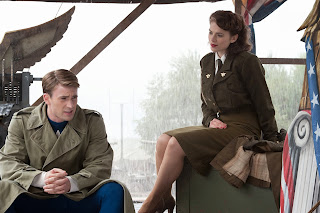 So whatever happened to Peggy Carter?” Marvel answers that in a new 15 minute film on the Iron Man III disc.

In the 15 minute short, director Luis Esposito fills us in. It's 1945, one year after Captain America has disappeared and WWII is over. Peggy Carter, played by Haley Atwell, is working for a top secret government spy agency, but only doing menial work and being treated very badly. When the “guys’ all go out for drinks, she is not invited. And good thing too! Alone in the dark office, she is handed an important mission designed for three or four people, but she goes it alone (and without permission). 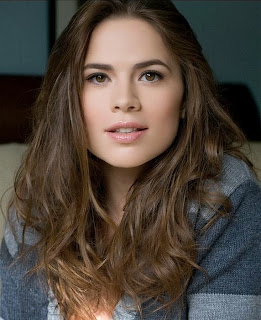 After her success, Howard Stark (sitting next to Dum Dum Dugan, played by Neal McDonough) invites her to help run his new organization: SHIELD!
This is a fun, inexpensive, 15 minute short with no special effects. While there is nothing surprising in the plot here, the whole thing works because of Hayley Atwell. She is just terrific. In the Captain America movie her character was often a bit restrained by the storyline, but on her own she does a memorable and wonderful job. And it finds a proper place for a great Marvel character that could have been lost in time.

If Marvel’s Agents of SHIELD takes off, there is a rumor that this could be turned into a series.

I already reviewed the movie, (http://forbushman.blogspot.com/2013/05/iron-man-iii-review-and-look-back-at.html) so let discuss the other aspects of the DVD/Blu Ray.