Iron Man III: A Review and a Look back at the Comic, the Commies and the Mandarin

Since this site is about comics this will note a usual review of the Iron Man Three movie but one that keeps his original comics in mind. (Note that the movie says Iron Man Three at the end, not III) 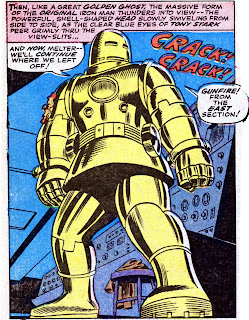 On Sunday, I saw Iron Man Three in Imax 3D with two of the contributors to this site, Nick and John Caputo. All of us thoroughly enjoyed the movie. The theatre was equally filled with men and women, showing that super-hero movies no longer appeal to only young men. I thought it was not as good as the first one but better than the second. The problem with all these trilogies; every movie will be compared to the last one.  I enjoyed the big Imax sound and picture, but the 3D and the glasses that came with it were more of a distraction than an addition.  Those glasses became uncomfortable after an hour. Oh, and before I forget, stay around for the credits, there is a small scene afterwards. 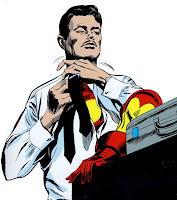 The REAL Iron Man Three was the Avengers movie, which, for a “comic book movie” was off the charts good. This movie does pick up on Tony Stark’s life where the Avengers’ movie leaves off.  This is not done with just a brief plot point or mention at the beginning, Robert Downey Jr. gives us a study of the character that lasts throughout the movie. Perhaps in real life as well as on screen, the man inside the costume is not as anxious to be there as he once was, there is less Iron Man here and more Tony Stark.

In the original comics, Pepper was not the ever present girlfriend of Tony Stark, he could not have one.  In the movie he has sort of an external pacemaker, but in the comic he needed the entire Iron Man  chest piece to keep his heart pumping and therefore he could not get close to any woman or she would discover his secret. In the comic, then, a romance develops between Happy and Pepper and they marry within four years. In the movies Gwyneth Paltrow’s Pepper has developed into the Lois Lane "damsel in distress."   But they think a bit outside the box here and on two occasions, it doesn’t work out quite that way.

So what does this have to do with the Brady Bunch? Ann B. Davis, Alice on that show, was the real model for Pepper Potts. Here is what Don Heck had to say on the matter in 1992: 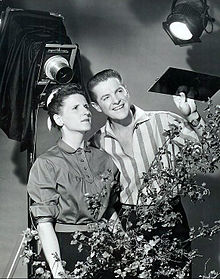 “They were people,” he observes. “I used to think of Pepper Potts as Schluzie from Bob Cummings’ “Love That Bob” (TV Show).   She was always interested in the boss and never could go out with him, and she’s thinking of all these dumb broads Stark is going out with. Happy Hogan was just a pug type, like Joe Palooka.” “Stan called and said he wanted Pepper to be prettier,” Heck laments. “That wasn’t my idea. As far as I was concerned, that killed it. If she’s homely and she winds up going out, then it’s a big deal. If she’s prettier, who cares? “Then, Stan said, ‘Make Happy handsomer.’ I liked him with his banged-up ears and crooked nose. He was fun to do at that point. When suddenly everybody had to be pretty, then I didn’t like him.”

In the comics, when Hydra was defeated at the end of 1965, three evil groups began appear: A.I.M. (Advanced Idea Mechanics); The Secret Empire and THEM.” They infiltrated the Marvel Universe, appearing in almost every comic except Spider-Man and Dr. Strange.  We learn later that these were all parts of Hydra which wasn’t destroyed as we thought, it just went underground and formed different factions. Well, A.I.M. rears its evil head in this movie, but there is no SHIELD. I missed Nick Fury.

While SHIELD was mentioned, once, there was no Samuel L. Jackson or Agent Colson. This made the movie seem a bit separate to the Marvel Universe that they had been developing on screen over the last few years. I was a bit disappointed here. 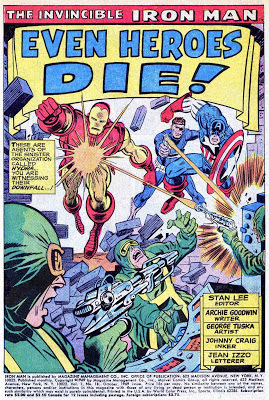 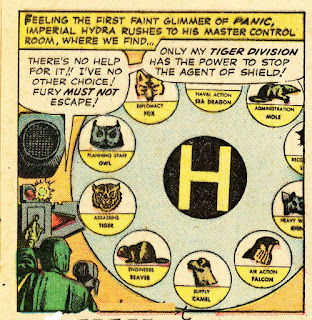 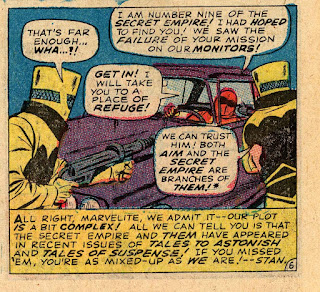 They actually do something almost brilliant, movie wise here. You see the Marvel Age was built using the cold war as a source for most of its enemies. Stan Lee said in Comics Journal #34: "The books that the other guys did all featured Nazi villains. You just couldn't make it as a villain unless you were a Nazi. A few years later when the word came down from D.C. that the Commies were the bad guys I just acted like one of Pavlov's dogs."

Most of Iron Man’s villains were a product of this paranoia. The Fantastic Four got their powers trying to beat the Russians to the moon, Tony Stark, originally, was held prisoner in communist Viet Nam and Dr. Banner was making a Gamma Ray bomb, aimed at Russia, when he was caught in the explosion that created the Hulk. The Mandarin was a Chinese villain, a clone of Fu Manchu and an update on Marvel’s 1950’s villain, the Yellow Claw. Mandy, was not a member of the Chinese Communist party. He developed more into a loner, a Dr. Doom sort of character. 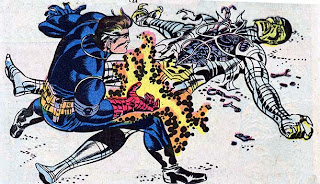 When Jim Steranko took over Nick Fury and SHIELD almost 50 years ago, he reintroduced Hydra, and gave them a Nazi background. They became the dominant villain at Marvel, eventually eliminating the cold war from the Marvel Universe. Quickly, the same bad guys began working for Hydra and AIM and the Cold War faded away. In the movie the Mandarin is a terrorist with no apparent affiliation with any country. How times have changed.

I personally asked Steranko about dropping the cold war aspects in the Marvel Universe and he said, “About the Cold War: I felt this theme was anathema to comics, that it was used over and over again without satisfying results. Although it was a just and patriotic cause to address, creators just did not know how to make it work. As you point out, there was no victor and could not be, even with some cataclysmic event. So, I changed the dynamic when the direction of S.H.I.E.L.D. was put into my hands. Enough was enough!”

I later asked Steve Englehart about it: “I think we all just walked away from it. The McCarthyite response to “Commies” had made them an embarrassment in pop culture. We all certainly understood that the real Communists were still out there and actually our enemies, but by the 70s they only worked as high-level, subtle, John Le Carre type bad guys. Anything less was tainted by 50s overkill.”

A SMALL, ALMOST SPOILER ALERT:
I am not going to give away any important plot point about the Mandarin, but you may not want to read this until after the movie. 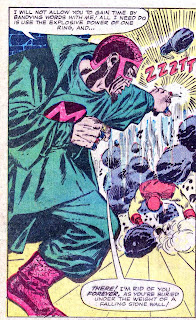 Today, economics have often become more important than politics. Iron Man has raked in over one billion dollars so far and $65,000,000 has come from our former cold war enemy, China. So, just like in the comics, but for very different reasons, Disney eliminated any conflicts with China, yet at the same time, keep the Mandarin.  So they found an original, clever way to do that.  First of all they cast Ben Kingsley, a fine actor, but not Asian to play the villain. (That didn’t stop him from playing Gandhi, however.) Then, they thought of a way out.

The filmmakers thank Stan Lee, Don Heck, Larry Lieber and Jack Kirby. Here is what Don Heck had to say about Kirby and Steve Ditko and Iron Man  from Comic Feature #22:

HECK: … I did the first (Iron Man ) story, remember-although the costume on Iron Man  was Jack Kirby’s.
HOWELL: All of them, or just the first one?
HECK: The first one was his (Kirby’s). The second one, with the yellow and red, was Ditko’s. I think it was IRON MAN -no, not IRON MAN , but TALES OF SUSPENSE No. 48, I believe.
HOWELL: Was it the one Ditko pencilled and you inked?
HECK: Could be, could be. I’m not sure, but I did one with Ditko, and I’m almost positive it was issue No. 48 that Ditko created the costume. 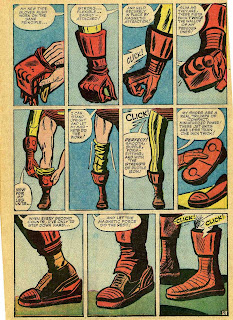 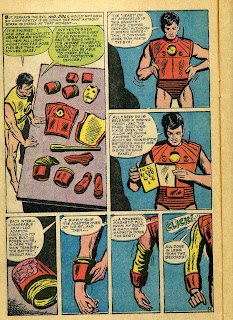 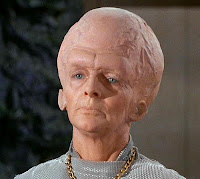 Finally. I read some reviews on Rotten Tomatoes and other sites that stated that while Iron Man Three introduced the concept of terrorism in the Mandarin’s attacks, it didn’t follow through with any real statement on that issue. Such a serious statement would be of no interest here.  This is not the real world, but one that exists solely within a comic book universe. In real life, there are no Iron Men, Avengers, Norse Gods or AIM villains. Terrorism is reality, Iron Man is fantasy.  As the Talosians would say, “May your way be as pleasant.”