The New Reprints: A Voyage of Discovery to the Golden Age of Comic Books

This project will be presented in twelve parts. Unfortunately, I can’t change the order, so later posts will appear first. Please try to check this out in order! And your comments are important. Please post how you became aware of comics and their history!


So let us continue our voyage to and from the 1960s and discover the world of comics once almost forgotten. Our expedition is mostly into the world of reprints that were available OUTSIDE the newsstands and comic book stores but we will have a few detours on the way.

Starting with Superman, in the summer of 1960, the DC Annuals came firs and they were very popular. Eventually they were called Eighty Page Giants but we still called them Annuals...even if they came out twice a year! These volumes contained stories mostly from the late 1940s and 1950s. Soon the entire Superman Family would each have their own editions, along with the Flash, Batman and the Justice League. 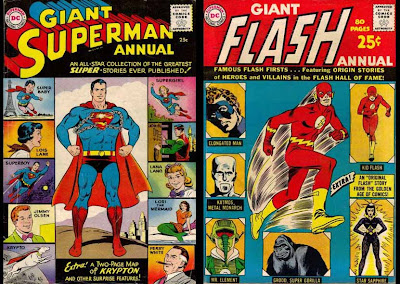 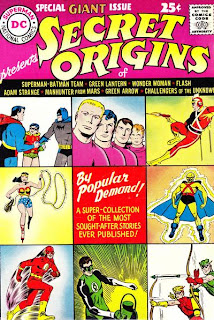 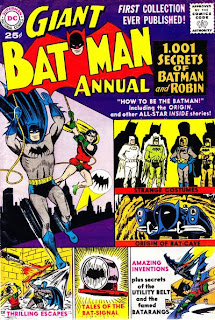 Back then, I knew that Superman had been around since 1938, but what I didn’t know that he wasn't the same Superman. He had a different costume, was much shorter, and was a wise-guy. The editors at DC knew that most of their younger readers didn’t know he was a very different character. Instead of going back to the early 1940s, these stories had the Superman I knew and they were wonderful, fun stories. 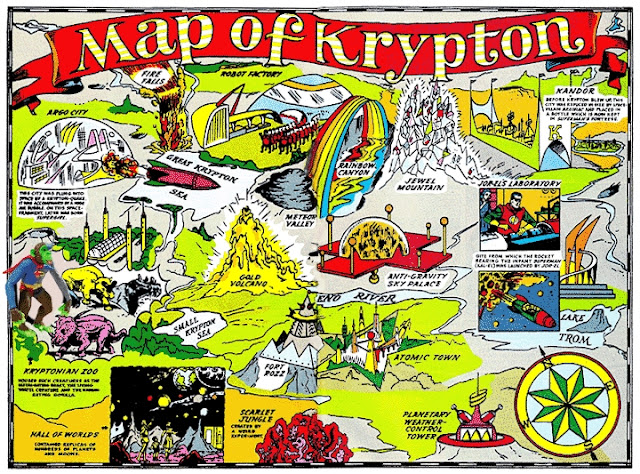 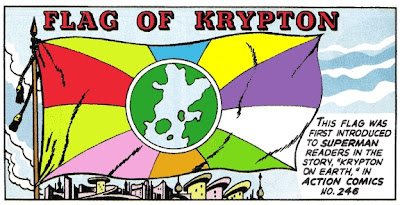 The map and flag of Krypton as they appeared in the first Superman Annual, 1961

There were no reprint payments then.  Also, with the Comics Code charging the publishers $15 a page to approve their work, DC did not have to pay any fees to the association on already approved stories, so DC was able to print these books at a low cost by using many stories from the late 1950s. 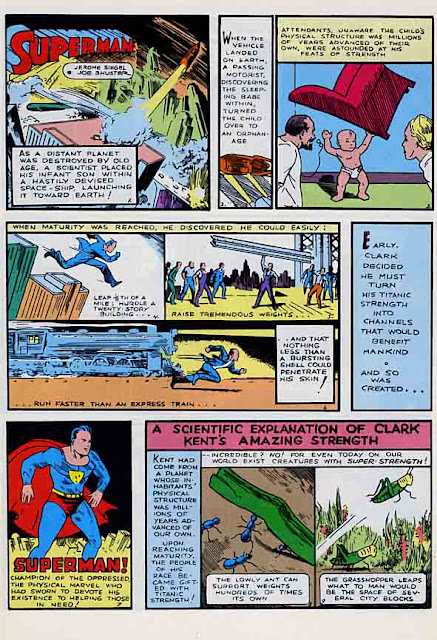 In the second Superman Annual (February 1961) DC reprinted (see above) a page from Superman’s #1. However, DC changed the dialogue from  "Nothing less than a bursting shell could penetrate his skin” to “Not even a bursting shell….” You see, my Superman was invulnerable, the original was just tough.  And mine worked at the Daily Planet, not the Daily Star. The annuals would, quickly have theme issues, among them were the "Alien Worlds," "Life on Krypton" and "The Strange Lives of Superman." The stories were not just reprints from Action and Superman Comics, but from Lois Lane, Superboy, and all the Superman Family comics. 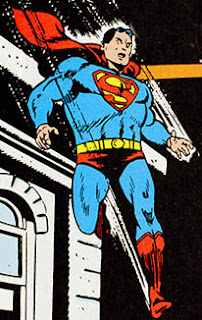 The Annuals also introduced me to the work of Wayne Boring, who I began to appreciate more and more. His Superman always flew in a standing up, vertical position, rather than the horizontal, “lying down” position I was used to. Many people have said that this is because Boring drew the “original” Superman, who could not fly, but jumped.


My favorite Superman Annual (now called 80 Page Giants) was #18, which had some great stories from the 1940s. They reprinted the first appearance of  “The Mysterious Mr. Mxyzptlk.”  My favorite reprinted tale was a wonderful story of Clark Kent taking Lois Lane to the movies and seeing a Superman cartoon! The villain was the same one who had appeared in the first Max Fleischer animated short. 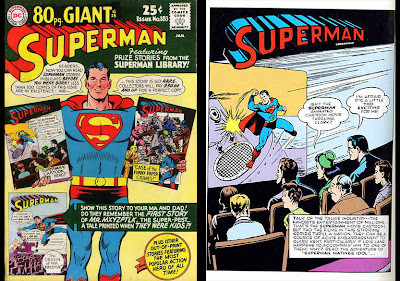 In my opinion, The Superman Annual #7 portended the term “Silver Age” of comics.  It was Superman’s 25th anniversary, his Silver anniversary. Once this cover appeared, the term  the “Silver Age of Superman” began, and, in my perception, it slipped  into the vocabulary of collectors and became the Silver Age of Comics. 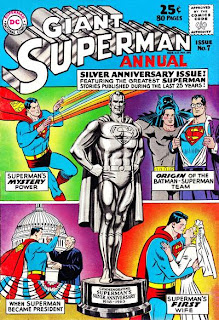 Batman was  to get his own annuals. Batman was also a very different character in 1960 than he was in the pre-code years of the 1940s. Darker, more violent and he even carried a gun. We were not to see those stories either. The Batman Annuals contained stories mostly from the early 1950s, but with one great treat!  They reprinted 6 pages of a  beautiful Batman Sunday comic strip from 1945. Wow! I had to wait a few decades to read more! 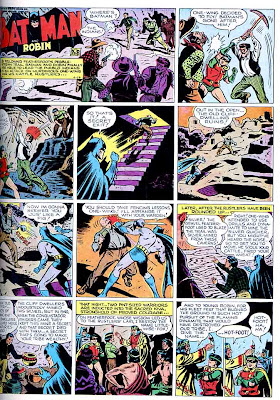 The 80 page giants would continue for a decade and would always be fondly remembered by fans. I warmly recalled “Secret Origins and More Secret Origins.” Those issues brought us up to speed on the origins of the Flash, Green Arrow, the JLA and many other DC characters. 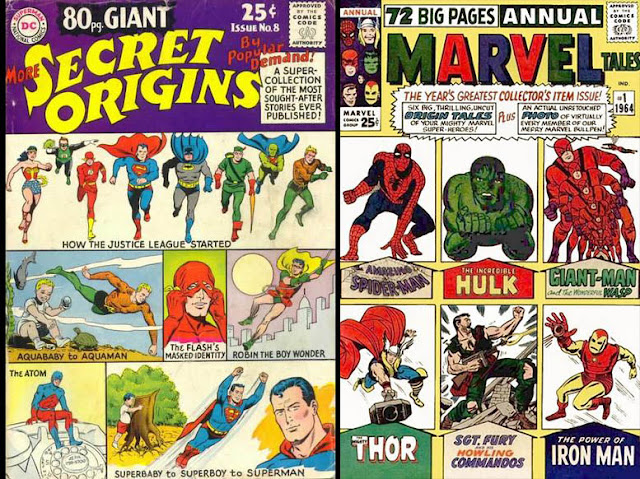 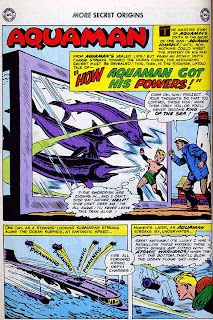 I suspect that Secret Origins was an inspiration for Marvel Tales, an annual whose first two issues, in 1964 and 1965, also told "secret' origins". But Marvel Tales was not the first reprint annual of the Marvel Age.  First was The Millie the Model Annual, with new material by Stan Greenberg, but containing reprints. Later, in 1961, Strange Tales Annual #1 gave us fantasy stories from the late 1950s. 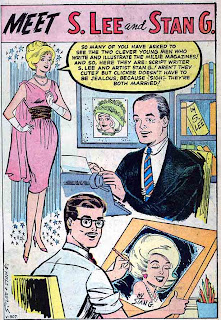 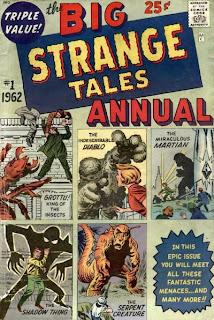 For a great blog on the Annuals that contained ORIGINAL material go to:
http://nick-caputo.blogspot.com/

and also go to Marvel Genesis for a discussion of the first Spider-Man Annual
http://www.marvelgenesis.com/

In 1966, Marvel Collectors' Item Classics, featuring bi-monthly reprints of the Fantastic Four and Spider-Man, began on a regular basis. They were a wonderful way for people to catch up. Soon Marvel Tales would also go bi-monthly, sharing Spidey and the Fantastic Four with MCIC and having Ant-Man, Iron Man and the Hulk join them in reprints.  Nick Caputo likes to tell how he was following the then-current Romita Spider-Man and the previous Ditko Spider-Man at the same time. 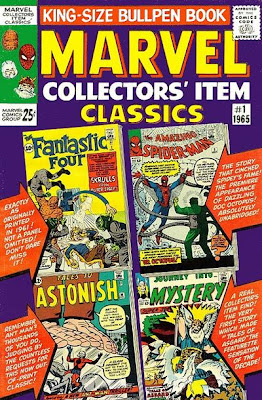 My favorite reprint pleasure was Fantasy Masterpieces. It started as a regular-size comic in 1966, and featured the “Monster Age” stories. With issue #3 it took a great leap backwards. It printed the Captain America, Human Torch and Sub-Mariner stories from the 1940s. Later it featured stories from the 1950s, including the Black Knight. Fantasy Masterpieces changed its name to Marvel Super-Heroes with issue #12 and continued reprinting these stories until issue #20. 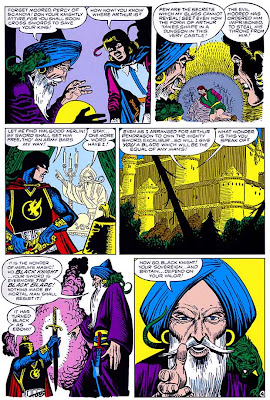 But we were not getting the pure Golden Age stories. As told by Roy Thomas in Alter Ego, the Comics Code required changes.  Below are two examples, with the Fantasy Masterworks scans coming from my collection and the originals from Marvel Masterworks. So the pure golden age stories would have to wait. (I did ask Roy’s permission to use my own scans in my own  blog.) Note that the names Simon and Kirby are removed from the Fantasy Masterpieces splash page. 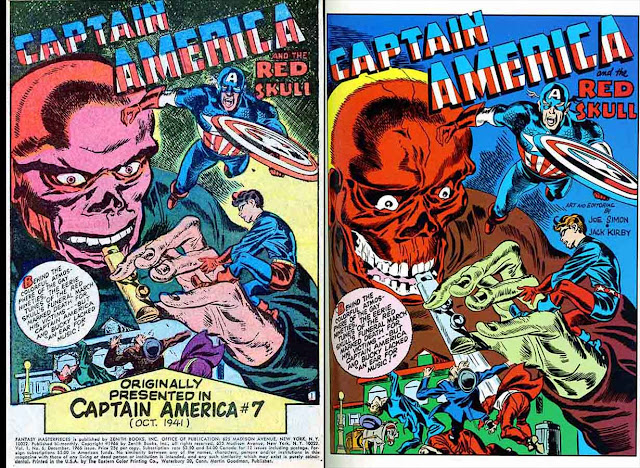 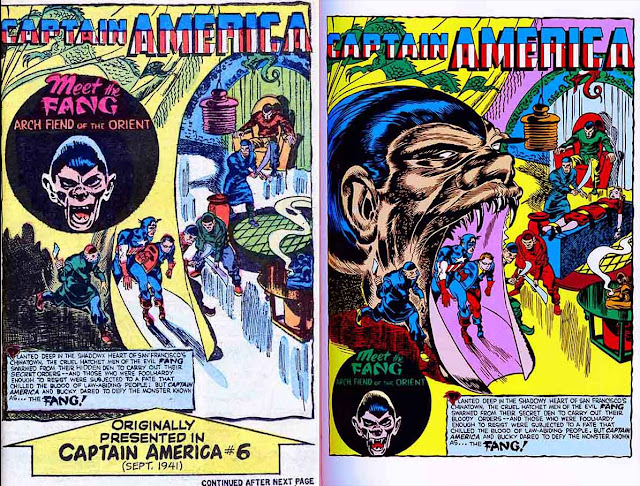 The comics themselves gave hints of the great age that went before.  First, Barry Allen, the Silver Age Flash, reads a Golden Age Flash comic, at breakfast, right before he gets his powers. 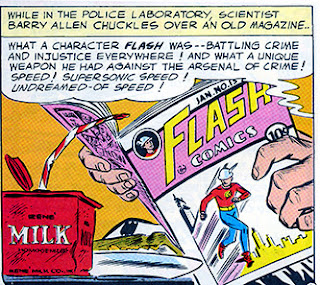 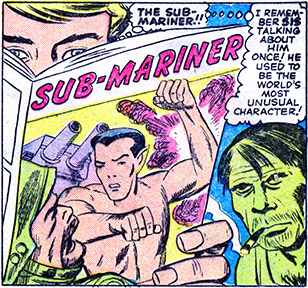 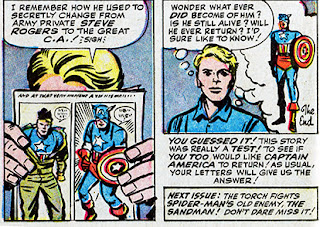 Of course, “The Flash Of Two Worlds” changed everything and lead to a crisis that never seemed to quite go away. 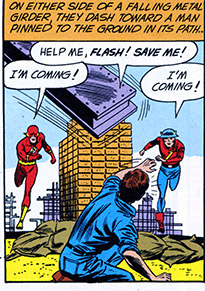 But who were these characters?  My mission continues. 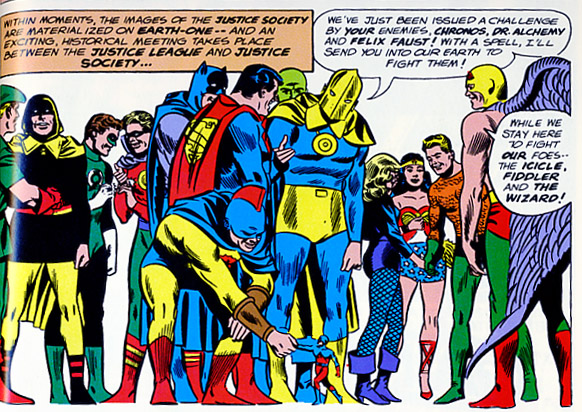 A special thank you goes to Kid Robson, host of the great comic blog: http://kidr77.blogspot.com/