What Stan Lee do after Steve Ditko and Jack Kirby left Marvel? 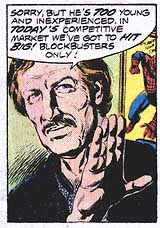 Let’s start with one important fact: The decade of the 1960s was Marvel’s most creative especially during the first five years. No company since has ever created so much great material in such a short time, especially with so few people.

I am often puzzled by people who try to diminish the accomplishments of Stan Lee by asking, “What did he do after Steve Ditko and Jack Kirby left?”  That is an ambiguous statement and it shows that they may not understand Stan’s job at Marvel in those days. Stan was not just a writer; he was the editor and art director for much of the decade. The question is ambiguous because Steve Ditko left in 1965, five years before Kirby did, in 1970, and we need to count those years, although many detractors don’t.

Of course, an equally valid question may be: “What did Kirby and Ditko do after they left Marvel?” 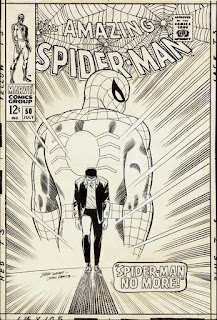 No matter what fans want to think, producing comics is a business, the art and story come second. Stan’s job was to make money for Marvel, produce comics on time, and increase sales. He did that very well. Even Jack Kirby would say that his job was “to sell magazines.” Not create good ones, but to sell them. In 1960, Marvel was selling 16,000,000 copies a year. By 1966, Steve Ditko leaves and we no longer have his version of Spider-Man.  Marvel then was selling 35,000,000 comics a year. Without missing a beat, Stan assigns John Romita to Spider-Man and adds many aspects to the character Ditko had rejected.  Aunt May becomes younger, Peter becomes better looking and he gets a girlfriend or two that he can actually keep. The new team not only produces great stories (I loved Spider-Man #39-40, Romita’s first issues) but soon, a great villain, the Kingpin. This version of Spider-Man draws in new readers and becomes a college sensation, drawing in the older readers that had abandoned comics a decade earlier.  Spider-Man becomes Marvel’s biggest seller.  By 1970, annual circulation at Marvel had increased to 60,000,000. Five years after Ditko left circulation doubles. That was Stan’s job. If you’re going to give him blame later you have to give him the credit now. With circulation up, and more money coming in, publisher and owner Martin Goodman enables Stan to recruit not just Romita, but Gene Colan and John Buscema at higher page rates than Marvel had offered before.  Iron Man and Daredevil are further developed and sell more comics with the team of Lee and Colan. Buscema adds to Spider-Man too, but does well with everything he touches. 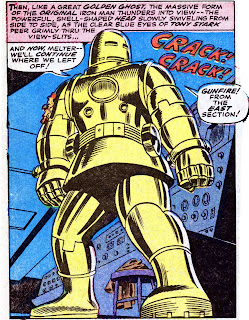 Different from DC’s Earth I and II, the concept of a singular Marvel Universe was Stan’s vision. While artists, including Steve Ditko, did not appreciate putting in guest stars, Stan loved the idea and did it often.  With circulation increasing it would have been hard to quibble with that idea. Stan’s vision though, has been incorporated into the last ten years of Marvel movies with incredible success. Those movies have taken in over 17 billion dollars. 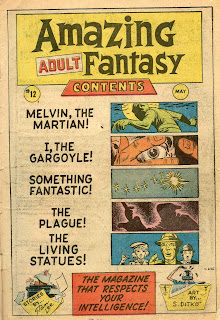 From the beginning of the Marvel Age, Stan injected many adult themes, including the cold war, unemployment, handicapped people and ageing into his stories.  This was something his main competitors did not do. He even retitled Amazing Adventures to Amazing Adult Fantasy, and advertised it as "The Magazine that Respects Your Intelligence." 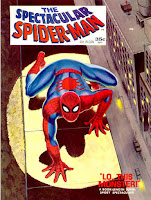 Lee wanted to push the limits of creating comics and he and Romita produced the black and white Spectacular Spider-Man, aimed at older readers.  Marvel also published the first Savage Tales, another magazine for adults that was also outstanding. Sadly, Goodman cancels them both. He was fearful that he would run into trouble with the Comics Code. It took courage, then, in 1971, for Stan to publish a three part anti-drug story in Amazing Spider-Man #96-98. It was published without the Comics Code approval. No other publisher or editor had done that before and there was a risk that no dealer would put in on the stands without a Comics Code seal. 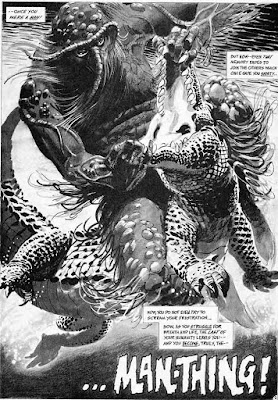 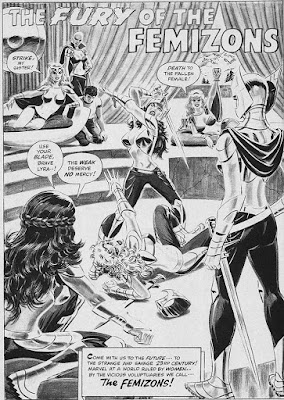 Stan was the editor of at least sixteen comics a month during the 1960s and writer for about half the stories.   At DC, several editors produced only five or so comics a month and of them, only Robert Kanigher wrote.  So, beginning in 1965, Stan hired Roy Thomas. Roy worked his way up to the Avengers, partnered with Buscema, Sgt. Fury with Dick Ayers, and the X-Men with Neal Adams. Roy and his partner produced great stories that sold well. 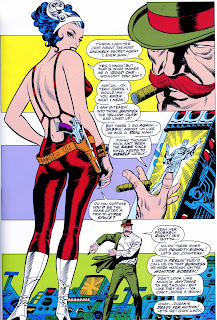 Nick Fury of S.H.I.E.L.D. was created by Jack Kirby, but assigning it to Steranko was inspired. Nick Fury’s circulation was not the highest, but his readers were very loyal. In other words, they kept buying the book. While at DC reprints were often from a generation earlier, Lee started (in 1965) reprint titles of fairly current stories. This catered to new readers and brought them up to date.  Oh, and I loved Not Brand Echh, which was a funny, satirical look at Marvel comics at first and the entire industry as time went by. By the end of the 1960s, circulation had reached 60,000,000. 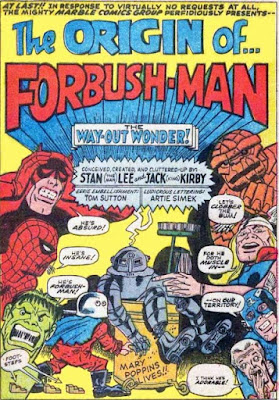 In 1968 Marvel is bought by Perfect Film and Chemical, Goodman is no longer the owner. Jack Kirby leaves in 1970. His last year at Marvel was not inspired, but it was still Kirby.  According to Mark Evanier’s Kirby bio, the new owners don’t really negotiate or try hard to keep Kirby.  This is foolish on their part, of course. Soon Kirby leaves and Stan takes an extended vacation and doesn’t write.

The new owners had a new direction for the company:

1. Initially, no more continued stories disrupting what had been established over the last decade.

2. They wanted, instantly, a huge amount of new titles, to compete, one on one with DC.

5. The black and white line was started.

6. And they wanted to go after the international market.
7. 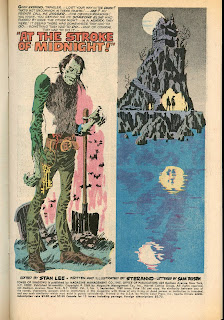 Under Stan, characters (except for Captain America and Nick Fury) appeared in only one comic, enabling their authors to control their continuity. Now, most title characters must appear in at least two books, with different authors, complicating continuity. (Spider-Man was in three titles.)

Stan Lee had to adapt to those changes. So what did Stan do with this burden?  Stan worked with Roy Thomas and creates a big hit with Conan the Barbarian and later Kull; Marvel returns to horror with great talent in Chamber of Darkness and Tower of Shadows; and takes the Silver Surfer to new heights with John Buscema.


But here is the big thing:  In 1973 Stan Lee becomes publisher. This fact is ignored by the dissenters.  This was a big step up in his career; it meant more money and more prestige and no writing or deadline pressure. He increases circulation at Marvel to 70,000,000. This is what a businessman is paid to do.

By the early 1970s the industry was not drawing in many new readers and total sales were declining. This meant that Marvel’s new readers came at the expense of DCs readers. Under Stan Lee, Marvel sales exceed DC for the first time and have remained that way ever since. 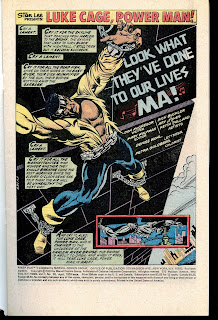 There were successes in the mid-1970s, Stan introduced many successful new comics. In 1972’s America it took courage to produce Luke Cage, the first African America hero to have his own national title. By having to produce so many new titles, in so many genres, and there were also many failures. Unlike publisher Goodman, Stan was not an owner and had to follow instructions. With so many new titles there was no time to develop new talent and the bookkeepers often decided what titles were to be cancelled. Often within a failure there is a success. The magazines of the mid 1970s mostly failed, but Conan, Deadly Hands of Kung Fu and a few others were successful.  Marvel did, lose most of its female readers.

Roy Thomas (Comic Book Artist #2 1998): There was a great drop off in female readers in the early ‘70s. We came up with three strips for which you made up the names and concepts: Shanna the She-Devil, Night Nurse and the Claws of the Cat. (We were) trying to woo the female readers back” Stan Lee said, “The failure of the Cat was my biggest disappointment.” 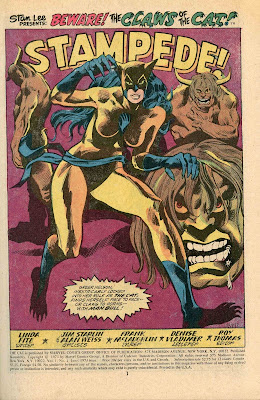 But Stan did give it the old college try.

There is no question that Lee, Kirby and Ditko did outstanding work and nothing like that has happened since at any company. While Ditko and Kirby continued drawing and writing, Stan’s career took a successful turn up the company ladder. Stan’s later trajectory does not parallel the other two, it was more perpendicular!